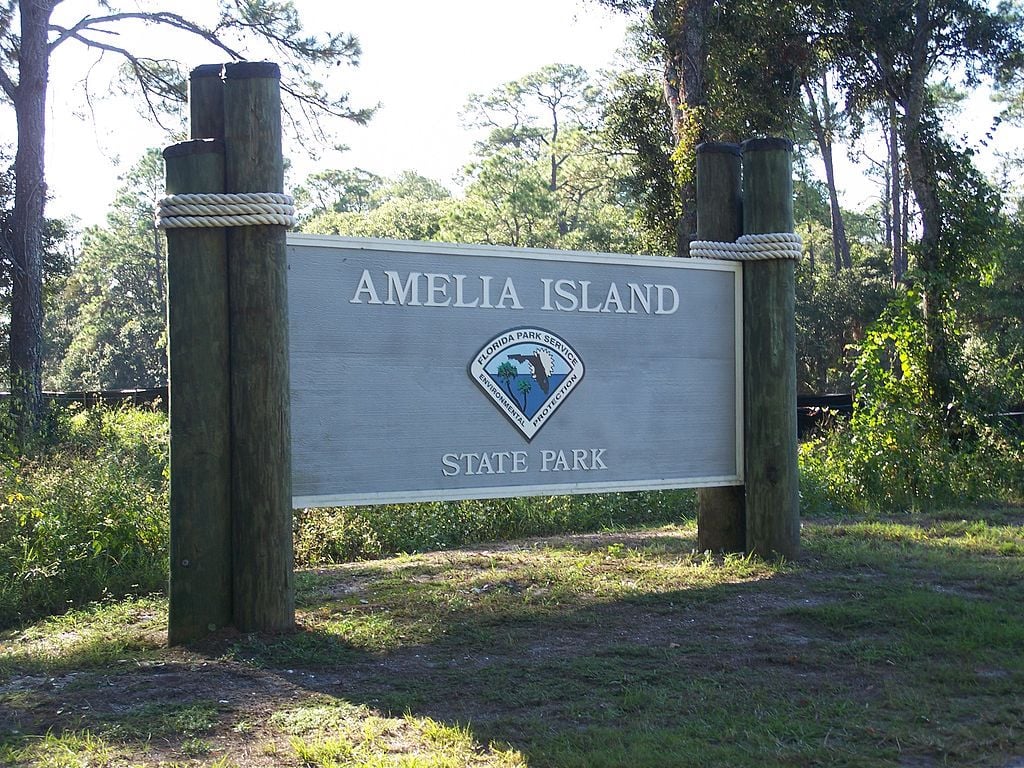 Most visitors come to relax on the beach, paddle the calm waters, and collect shells. There is also a large amount of wildlife in the state park, and nearby.

The shores of Amelia Island State Park are home to a variety of protected species including shorebirds and sea turtles.

Many forms of marine life can also be seen, including dolphins, manatees, otters, and stingrays which all thrive in the protected coastal waters.

Interestingly, Amelia Island State Park is the only state park in Florida that allows horseback riding on the beach. Visitors come from all over to have this unique and memorable experience.

Amelia Island is approximately 40 minutes’ drive from downtown Jacksonville. The historic town of Fernandina Beach is also 20 minutes away.

Amelia Island is also one of the best Florida beaches near Atlanta, making it a popular destination for many Atlanta vacationers.

Its close proximity to the Florida-Georgia border makes Amelia Island State Park a popular weekend destination for many residents of southern Georgia, as well.

Amelia Island has a long and fascinating history.

The Native Timucuan People once called Amelia Island home. They thrived on the coastal islands for thousands of years before they were wiped out by European settlers who began arriving in the 1500s.

The site helps preserve and memorialize the memory and culture of Florida’s Native Americans. Visitors can learn about their culture and explore the natural areas where Timucuans once lived.

Amelia Island State Park offers many amenities for visitors to enjoy for a small $2 entrance fee.

Admission is collected in an “Honor box” so visitors should be sure to bring cash and exact change to pay the admission fees, which help support the state park.

Amelia Island is filled with things to do. Most activities revolve around the beach and the park’s beautiful natural environment.

Horseback riding on the beach

Riders will embark on a 5-mile horseback journey through the sand dunes and along the shoreline. The exact route often changes according to tides, weather conditions and other conditions.

At the time of this writing the tour costs $125 per person and lasts for approximately one hour.

The calm, sparkling waters off Amelia Island are a perfect place to paddle.

Dolphins, manatees, and rays can sometimes be spotted along the miles of saltwater trails within the park.

Kayak and paddleboard rentals are available through a number of tour operators, including Kayak Amelia.

The cost of kayak tours in Amelia Island typically range from $45 – $70.

Paddlers with their own kayak or paddleboard can launch from the on-site launch ramp for $1 per person.

Amelia Island State Park is known as a fishing paradise.

A mile-long fishing pier, the George Crady Bridge Fishing Pier, is located adjacent to the park.

Many species, including Wahoo, Flounder, Drum, Grouper, Redfish, King Mackerel, and Speckled Sea Trout are just a few of the sought-after fish that can be found here. Fishing is also permitted along the shoreline.

On the Line Bait and Tackle Shop offers a wide variety of fishing supplies as well as refreshments. Visitors to the park looking to fish may need to obtain a Florida fishing license in advance.

The beaches of Amelia Island offer some of the best seashell hunting in Florida.

The beaches are well known for the colorful shells which line its seashore. Shell collectors will find a wide variety of clam, scallop, and oyster shells as well as the occasional shark tooth or sand dollar. The best times for shelling are during low tide and after storms because intense wave action helps uncover shells and wash them onto beaches.

Bicyclists can also ride along A1A and over the Nassau Sound Bridge. Bike rentals at Amelia Island State Park are available for $8/hour or $24/day.

Amelia Island State Park is one of the best places for birding in Florida.

The state park is part of the Great Florida Birding Trail, making it a great spot to find migratory bird species and a variety of coastal and wading birds, among others.

Several species of shorebirds including piping plovers and black skimmers can be spotted feeding amongst the crashing waves.

Diving birds such as ospreys and pelicans are often seen hunting and fishing in the waters offshore year-round. Bald eagles can often be seen in winter months.

During the spring, certain parts of the park may be closed off to protect wildlife nesting habitats, but the nests can usually be spotted with binoculars.

In addition to a variety of birds, Amelia Island State Park has an abundance of other wildlife spotting opportunities.

Sea turtle season runs from May to October with loggerhead, leatherback, and green sea turtles coming to nest on the beaches. Beachgoers are reminded to use extra caution around these delicate nesting sites.

Amelia Island State Park is one of the best places to see whales in Florida.

The endangered northern right whale migrates to the waters off Amelia Island during the winter as part of its annual migration. The annual Right Whale Festival celebrates the return of these critically endangered sea mammals.

While the park only offers a small concession stand with snacks and drinks, there are plenty of places to eat near Amelia Island State Park and the surrounding islands.

Beachside restaurants and bars line the streets of the scenic coastal byway A1A which runs through Amelia Island.

Picnicking is permitted on the beaches and there are several picnic tables throughout the park, available on a first-come, first-serve, basis.

Can you camp in Amelia Island State Park?

While camping is not allowed inside Amelia Island State Park, campers can find plenty of options nearby.

Campgrounds, beachfront camping, and RV parks are scattered throughout Amelia Island and the surrounding Talbot Islands.

Are there alligators in Amelia Island State Park?

Alligators are present in Amelia Island State Park, and are found in all parts of Florida. While alligators usually prefer freshwater areas, they have been found on beaches and in saltwater, including on Amelia Island.

Visitors to any Florida State Park should exercise caution in accordance with FWC guidelines for living with alligators and always follow posted warning signs.

Can you see dolphins at Amelia Island State Park?

The waters surrounding Amelia Island State Park are home to the Atlantic Bottlenose Dolphin and other species.

Beachgoers and kayakers may be lucky enough to catch a glimpse during their visit to the park. Nearby tour operators, Backwater Cat Adventure, offer dolphin-watching boat tours around Amelia Island.

Can you drive on the beach at Amelia Island State Park?

Driving on the beach is allowed at Amelia Island State Park, subject to rules and restrictions.

Amelia Island State Park is one of only a few beaches in Florida which allow driving on the beach.

Driving on the beach is possible 365 days a year from 8am until sundown. State park officials strongly suggest 4×4 vehicle because it is very common for vehicles to get stuck in the sand.

Getting stuck can cause expensive vehicle damage and generally creates an ordeal which should be avoided.

Driving on the beach after-hours is not permitted. Beach vehicle access and beach parking is limited during peak times.

Visitors may be turned away and the park may close when the park reaches capacity, and will only reopen after a sufficient number of people leave.

Amelia Island State Park is a relaxing beach oasis just a short drive from many major cities. The beaches are beautiful, quieter and less “touristy” than other beaches in Florida.

You’ll mostly find locals fishing and enjoying all the serene nature the park has to offer. If you enjoy horseback riding, the horseback riding experience is a visitor favorite.