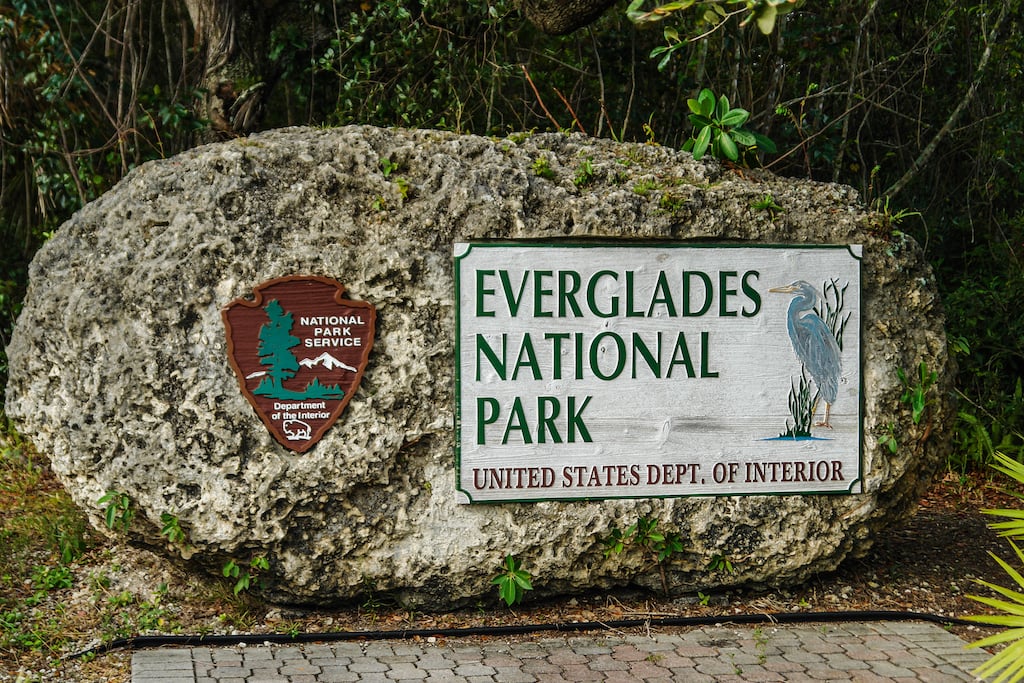 Everglades National Park is home to incredible wildlife, including:

Over one million people visit Everglades National Park every year to hike its nature trails, kayak through mangrove tunnels, observe rare wildlife and experience one of the rarest places on earth.

The Death of the Everglades

Everglades National Park protects only a small portion of the Florida Everglades. More than half of the Everglades has already been destroyed.

Today, even with supposed “protection”, the remaining Everglades ecosystem is in the process of being destroyed by corruption, water mismanagement and pollution.

In nature, everything is connected. The death of the Everglades has far-reaching consequences throughout Florida, and contributes to some of the biggest problems facing Florida:

Everglades National Park is huge. You can do a short day-trip, but many of the best things to do in the park require more time.

There are three main park entrances and sections. The park sections are separate, and are not connected from within the park.

For most people the best time to visit Everglades National Park is during the winter dry season, roughly from December until April.

You’ll enjoy your visit more if you already know the importance, history and future of the Everglades. Learn about why the Everglades is dying, and why it’s taking all of Florida with it.

The Everglades is not at all like most people imagine it. The water is actually crystal clear in many places. The water used to be so clean that native Americans drank it straight from the “swamp”.

There is a ton of wildlife in the Everglades. Some of it can be dangerous, including alligators. Vultures, birds and wildlife can damage vehicles. They’ll steal food and spread trash if anything is left unattended.

Most parts of Everglades National Park are in extremely remote, isolated regions. Some areas have concessionaires who sell food, snacks and drinks. Other areas of the park do not have any food, drink or service offerings. Visitors should plan ahead and know if they will be in an area with or without services, and come prepared!

Cell phone service can be limited in some areas of the park and campgrounds.

There is a fee to enter Everglades National Park. The price varies, based on the vehicle used to enter the park. The standard park entry fees are:

Visitors can use various types of national park passes which may provide free entry or a discounted price.

There are also a number of free visit days throughout the year.

More fee information can be found from the Everglades National Park website.

Note: Be sure to plan ahead and give yourself enough time inside the park.

Many visitors complain that they felt “ripped off” because they entered the park without enough time, and paid a $30 entrance fee “for no reason”.

Everglades National Park is located at the very southern tip of the Florida peninsula. The park is enormous, and includes more than 1.5 million acres.

The park boundaries include three counties in Florida, including Miami-Dade, Monroe and Collier counties.

Each entrance gives access to a separate section of the park. The sections and entrances are far apart, and are not connected to each other from inside the park!

The primary entrances to Everglades National Park include:

Many visitors don’t realize that there are multiple separate entrances, and several main visitor centers in Everglades National Park.

More information can be found on the Everglades National Park visitor center page.

When is the best time to visit Everglades National Park?

For most people the best time to visit Everglades National Park is during the winter “Dry season”.

The exact dates are imprecise because weather is unpredictable, but the dry winter season generally lasts from approximately November until April.

The winter dry season is best because it has:

The park hosts most of their guided tours and organized activities during the winter dry season, and most park areas and activities should be open for visitors.

On the downside, the winter dry season is the park’s busiest time, so visitors should be prepared for crowds.

Campsites, guided tours, and tram tickets often fill up or sell out during this time, so it’s best to plan ahead and make reservations whenever possible.

Note: Many areas of the park close down for the hot rainy season, but most areas are staffed and open during the winter dry season. Some areas may still be closed in the winter if there is storm damage from the previous hurricane season.

Although the winter dry season is the best time to visit, the Everglades can still be visited during the summer wet season.

If you visit during the summer be sure to be prepared for:

Why would people visit Everglades National Park in the summer rainy season?

The park may not always be a primary visitor destination, so some people may find themselves in the park during the summer.

Many people visit Everglades National Park as a day trip from Miami, Naples, the Florida Keys, or other destinations in south Florida.

Some visitors actually prefer to visit Everglades National Park during the summer rainy season because it offers the best conditions for some activities, like fishing.

The climate in south Florida and the Everglades is subtropical. There are really two main seasons:

Winters are mostly dry and are generally very pleasant. Temperatures are usually mild with warm days and cool nights. There are occasional periods of cold temperatures, especially during cold fronts.

The weather can become surprisingly cold during cold snaps, and windchills can drop to dangerously low temperatures.

The exact seasonality of the Everglades varies slightly from year to year, but is fairly consistent along these monthly weather patterns:

Dry season is the best time to visit the Everglades, and is when most people visit the national park.

Days are warm, and evenings are cool. The weather is usually dry, except for occasional rain storms, sometimes related to the arrival of northern cold fronts.

Wildlife is most active during the dry season because water levels recede, and wildlife is concentrated into smaller areas.

Migratory birds are also in the Everglades and south Florida for the winter.

Because wildlife is concentrated into smaller spaces, predators like alligators, crocodiles, birds of prey and others are more active, making them more exciting to observe.

The summer wet season is the “low season” in Everglades National Park.

During the wet season giant sheets of water flow southward from Lake Okeechobee, into the Everglades. The entire region floods with fresh water.

Wildlife of all kinds leave watering holes where they spent the dry season.

Swarms of mosquitoes, no see ums, biting flies and other insects are generally the worst during the wet season because ample water is available for larvae to hatch.

Visitors who come to Everglades National Park during the wet season should plan their visit carefully to avoid disappointment.

Some parts of the national park have reduced service offerings during summer rainy months, and some parts of the park may be closed due to maintenance or lack of available staff.

Even during closures some areas of the park may remain open for self-guided tours. For details it’s best to contact the national park service directly to inquire about specific plans.

Hurricane season in Florida begins on June 1 and lasts until November 30. Not surprisingly, hurricane season closely aligns with the Everglades’ wet season.

Visiting the Everglades during hurricane season may lead to disrupted plans due to park closures, park damage from a previous storm, evacuations, or other disruptions.

Visitors should be aware of hurricane and storm risks, and plan accordingly.

Frontcountry camping refers to camping in staffed campgrounds with various levels of facilities and service offerings.

There are two main “Frontcountry” campgrounds inside Everglades National Park.

These drive-in campgrounds each accommodate both tent and RV camping. These campgrounds have designated campsites with varying levels of facilities and amenities.

Both of the major campgrounds, Long Pine Key Campground and the Flamingo Campground, are accessible from the Homestead park entrance.

Reservations for both campsites tend to fill up quickly and usually require advance planning.

We hope you enjoyed this guide to Everglades National Park.

We try to continuously update and improve our guides. Please let us know if you notice anything that needs to be updated, or if we left anything out.