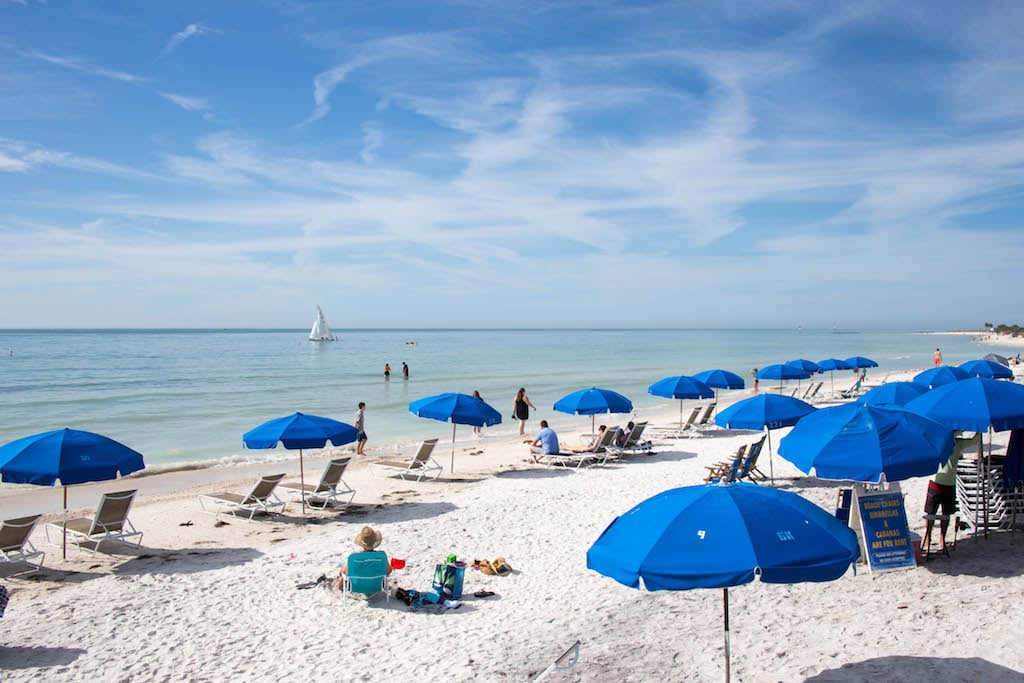 Honeymoon Island State Park is one of the most visited state parks in Florida.

Famous for white sand beaches and turquoise waters, it spans 385 acres and has more than 4 miles of beaches for visitors to enjoy.

In addition to its pristine beaches, Honeymoon Island State Park has several miles of unspoiled wilderness with pinelands, nature trails, and wildlife habitats.

Honeymoon Island State Park is located on an island off the west coast of Florida in the Gulf of Mexico. It is about a 45-minute drive from Tampa and a little over two hours from Orlando.

Its proximity to these major cities makes the state park a popular weekend destination for both Florida locals and visitors.

Caladesi Island is only accessible via watercraft, so visitors who visit Caladesi via the public ferry must first stop at Honeymoon Island to access the ferry dock.

Honeymoon Island and nearby Caladesi Island were once adjoined as one large island. It was known as hog island and inhabited by the Native American Tocobaga Tribe until the arrival of Spanish explorers in the 1500s.

Prehistoric tools and pottery have been found in nearby archeological digs, the artifacts are believed to have been from the Tocobaga inhabitants.

In 1921, a major hurricane hit the island and split it in two, creating a new waterway known as hurricane pass. The upper island later became Honeymoon Island. The lower portion would become Caladesi Island.

Many people wonder how Honeymoon Island got its name.

The name Honeymoon Island came from the businessman who purchased the island in the 1930s, Clinton Washburn.

Washburn had plans to turn the island into a honeymoon destination and began building cottages in the 1940s.

While honeymooners did visit the island, the concept was short-lived as the start of WWII ushered the island in a new direction for defense purposes.

Later plans to develop the island into residential areas in the 1960s also failed and the land was then purchased by the state.

In 1981 Honeymoon Island State Park was officially created and the park’s many plants, animals, and lands were protected.

Honeymoon Island State Park has an entrance fee of $8 per vehicle. The state park also offers many other amenities which may require additional fees.

The beaches of Honeymoon Island State Park are perfect for lounging but also offer a wide range of activities. Beachgoers can enjoy swimming, snorkeling, surfing, shelling, and fishing along the 4 miles of shoreline within the park.

Beach umbrella and chair rentals are available at the park and range from $15 to $30 per day.

There is also a designated dog beach on the park’s southern end where dogs can play and swim.

Honeymoon Island is widely considered to be one of the best dog beaches in Florida, and is one of the few Florida State Parks where dogs are allowed on beaches.

Kayaks are available for rent insider Honeymoon Island State Park; prices start at $35 as of the time of this writing.

Rates are variable, and are based on the type of kayak, single or tandem, and the number of hours rented. Paddlers with their own kayak can launch from one of the many beach sites for free.

Kayakers can explore the waters around Honeymoon Island or paddle over to Caladesi Island or the Dunedin Causeway.

While on the water, kayakers often spot wildlife including the dolphins and manatees that frequent the bay.

Honeymoon Island State Park has a 2.5-mile hiking trail that winds through a pineland forest.

Hikers can spot a variety of wildlife, including birds, armadillos, gopher tortoises, and even rattlesnakes, for which hikers are advised to keep their distance.

A shorter, 0.3-mile boardwalk trail also leads from the nature center providing beautiful views of the park, beach, and wildlife.

A 1.5-mile paved bike trail runs through the park with ocean views and plenty of shaded spots to stop and rest.

Bike rentals are available through the park, including tandem and four-person surrey bikes. Bike rental prices start at $12 per hour.

A variety of wildlife can be spotted throughout Honeymoon Island State Park including many species of birds.

Nesting birds like owls and ospreys can be found in the pineland areas of the park. Shorebirds such as herons and egrets are often seen along the beaches and estuaries. Gopher tortoises, armadillos, raccoons, and rattlesnakes can also be found in the park, mostly in the forested areas.

The waters surrounding Honeymoon Island are full of marine life, including many species of fish, crabs, stingrays, dolphins, manatees, sea turtles, and sharks.

Sea turtle nesting season on Honeymoon Island lasts from May through October. Several species of sea turtles, including Loggerhead and Kemp’s Ridley Sea Turtles, come to nest on the island.

Beachgoers are reminded to use caution, be respectful, and not disturb sea turtle nesting sites.

Guided trail walks and other educational programs are also available through the nature center. Just outside of the nature center sits a native plant garden that is home to butterflies and tortoises.

Both offer light beachy bites like seafood baskets, sandwiches, and frozen cocktails. Snacks, soft drinks, and ice cream are also available for purchase through their concessions.

Visitors to Honeymoon Island can also bring their own food. Picnic tables and charcoal barbeque grills are available throughout the park on a first-come, first-serve basis. Pavilions for larger parties can be rented in advance.

Honeymoon Island State Park is a top Florida beach wedding destination. With some of the best locations for photography showcasing turquoise waters and colorful sunsets, it’s easy to see why this park tops many wedding lists.

The park offers several wedding packages and can accommodate more than 100 guests. In addition to weddings, similar packages are offered for other celebrations such as birthdays, showers, and corporate events.

Can you stay overnight in Honeymoon Island State Park?

It is not currently possible to stay overnight on Honeymoon Island State Park. While the island was once home to honeymoon cottages long ago, there are currently no overnight accommodation options on Honeymoon Island. The state park does not offer camping. There are several hotels and resorts just minutes away on the mainland.

Are there sharks in Honeymoon Island State Park?

The waters surrounding Honeymoon Island State Park are home to many species of sharks. Unprovoked encounters between humans and sharks remain very rare.

Honeymoon Island State Park is dog friendly. Dogs are allowed on the nature trails and the designated dog beach area at the southern end of the park. Dog owners are expected to clean up after their pets, keep them away from wildlife, and keep them leashed at all times.

Are there rattlesnakes in Honeymoon Island State Park?

Honeymoon Island State Park is a peaceful retreat just a short drive away from some of Florida’s major cities. Although it’s one of the busier Florida State Parks, its 4 miles of beachfront give visitors plenty of space to spread out.

The park has stunning views, many amenities, and is overall a great place to spend an afternoon.
More information can be found on the Florida State Parks website.