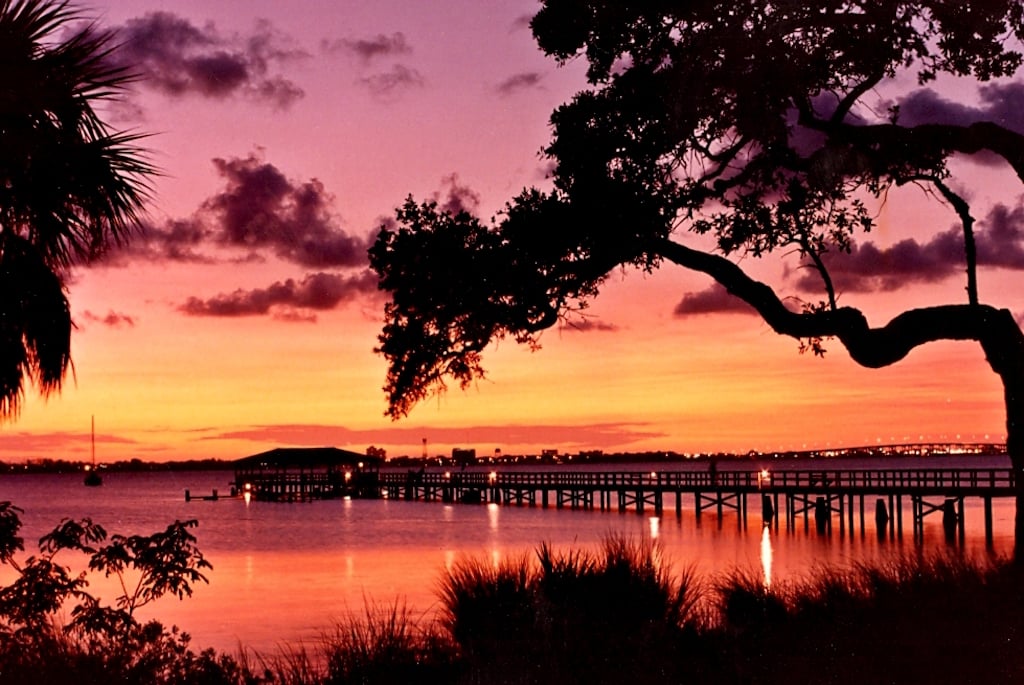 Melbourne, Florida is a small beach town on the east coast of Florida.

Melbourne is located in Brevard County and has a population of approximately 80,000 residents.

The city of Melbourne is located on Florida’s mainland, along the Atlantic coast.

Melbourne is approximately 70 miles southeast of Orlando, and 20 miles south of Cocoa Beach.

Melbourne sits about halfway down Florida’s Atlantic coast, between Miami and Jacksonville.

There is smaller, separate city named Melbourne Beach on a barrier island, just across the Indian River Lagoon.

Melbourne is located in a region known as Florida’s “Space Coast”.

The name comes from the nearby aerospace industry; especially the Kennedy Space Center and Cape Canaveral Space Force Station.

Space-related tourism is a popular draw to the region, and many residents enjoy benefits of the large aerospace industry.

The Space Coast is one of the best places to watch rocket launches in Florida.

Melbourne has a diverse animal population, and vibrant marine and terrestrial ecosystems.

The Indian River Lagoon is one of the most biodiverse areas in the northern hemisphere.

This stretch of the Atlantic Ocean also has a high degree of biodiversity, thanks to Florida’s Gulf Stream Current.

Like most of Florida, Melbourne has been inhabited by humans for tens of thousands of years.

There is evidence of early Paleo-Indians, and the animals they hunted.

Fossils of mastadon, mammoth, bear, sabre-tooth cat, camel, and other species have all been found in Melbourne.

Many ancient human skeletons and early hunting tools have also been found.

Melbourne was first settled by modern, non-indigenous residents in 1877.

The community was originally called Crane Creek, after a local waterway just north of the city.

Cane Creek was later renamed to Melbourne in honor of the city’s first postmaster, who was from Melbourne, Australia.

In 1969, Melbourne merged with the neighboring city of Eau Gallie to form one city. The combination doubled the size of Melbourne.

Today it’s considered to be a leading economy in the Palm Bay/Melbourne/Titusville Metropolitan Statistical Area.

Melbourne is home to several annual festivals. The largest and most popular include:

Melbourne is well-known for upscale shopping and restaurants. The city has a nice mix of small, local boutiques and established chains.

Melbourne is one of the closest beaches to Orlando, along with a handful of other small beach towns.

The Best Things about Melbourne

Residents say living in Melbourne means you are close to everything, but without the downsides of big-city living.

This city is only an hour away from big theme parks like SeaWorld and Disney World. It’s also close to water parks like Disney’s Typhoon Lagoon, Blizzard Beach, and Universal’s Volcano Bay.

This city is also close to Port Canaveral, one of the busiest cruise ports in the world. Many people who live in Florida enjoy last-minute cruises because they are so affordable and convenient.

They also say it’s a great place to raise a family. Thanks to its high-tech and space-industry ties, Melbourne has some of the best public schools in Florida.

There are also many employment opportunities, from tourism to the aerospace industry.

Like all of Florida, Melbourne does not have a state income tax.

One of the largest downsides to living in Melbourne is that the area is very vulnerable to hurricanes.

Powerful hurricanes can be devastating for residents, and turn lives completely upside-down. Many people become exhausted by the constant threat of storms, and the unexpected costs which come with evacuation and hurricane preparation.

Although Melbourne is considered to be a moderately affordable beach town when compared to high-cost-of-living alternatives, the costs of living in Florida can erode many of the cost savings and advantages.

Melbourne is a laid-back community. Golf, beaches, outdoors and watersports are the main attractions. Some people love that quality; others may find it to be boring.

Melbourne does not have a large nightlife scene like Miami. So, if partying and nightlife are important to you, you may not enjoy that aspect of visiting or living in Melbourne.

Like all of Florida, Melbourne has a subtropical climate.

It is very hot and humid in the summer, with daily afternoon squalls and thunderstorms. Winters are usually dry, mild and very comfortable.

The City of Melbourne