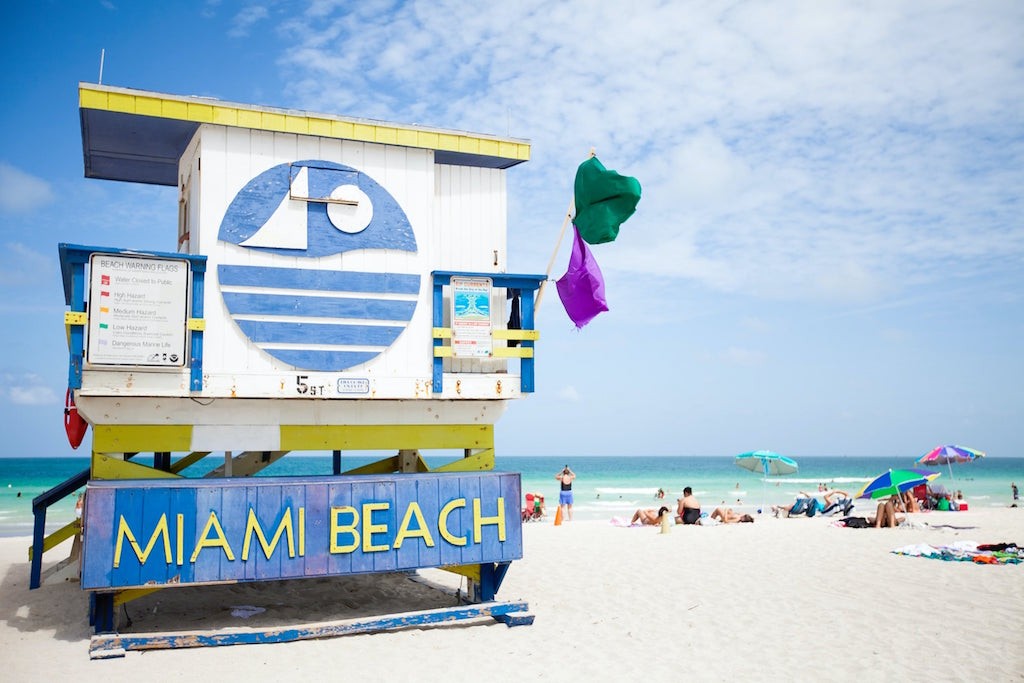 Miami Beach is the most famous beach in Florida. It is an extremely popular destination for tourists and is a popular cultural icon of south Florida.

Miami Beach is famous for being a hip, fashionable destination and its posh culture. It has a unique Art Deco District with its signature pastel colors and signature architecture.

The island city is also known for its thriving nightlife scene and the wide variety of nightclubs in Miami Beach.

Like much of south Florida, Miami Beach has an extremely lively Hispanic community and latin-influenced culture.

A significant portion of the population is Hispanic and many speak Spanish as their primary language.

There is a very large Cuban influence in Miami Beach, as well. Cuban food and culture are prominent features, and are main attractions for many visitors.

Miami Beach is located entirely on a barrier island, just offshore from Miami and Florida’s mainland. It’s sandwiched between two bodies of water; the Atlantic Ocean to the east and Biscayne Bay to the west.

The island of Miami Beach is small, but it has an extremely high population density. It is home to an estimated population of almost 100,000 residents, not counting the huge number of annual visitors. Visitors and guests on the island can more than double the island’s population at any given time.

Even though it is squeezed into a tiny land area, Miami Beach is one of the largest cities in Florida by population.

North Beach runs from 60th street up to the small beach town of Surfside.

North Beach is the most family-friendly section of Miami Beach. It is quieter than South Beach and Mid-Beach, and generally feels much less hectic.

The beachfront area of North Beach is filled with high-rise hotels and condos, but also has some parks located on or near the beachfront.

The North Shore Open Space Park is a nice area to visit, and has many convenient amenities, including a playground and dog park.

North Beach has an eclectic mix of international cuisine, including many Jewish delicatessens, Italian trattorias and a wide range of latin cuisine, ranging from Argentinian food to Mexican food, and every country in between.

The Mid-Beach area of Miami Beach stretches from approximately 24th street to 60th street. This area has an upscale flavor with trendy boutique hotels and restaurants.

Many visitors love the balance of Mid-Beach. It is located outside of the immediate action and turmoil of South Beach, but is close enough to be convenient.

Indian Park Beach is one of the best places to go in Mid-Beach. It has many amenities that make it a great section of the beach.

It has a large parking lot and other conveniences, including showers, a playground, restrooms and a concession snack bar.

South Beach stretches from South Point Park at the southern end of Miami Beach up to 23rd street. By far, South Beach is the liveliest and is most known for its party atmosphere.

South Beach is filled with bars, restaurants and nightclubs; many stay open literally until sunrise. On the beach public alcohol consumption, nudity and wild partying can all be common sights, even if they are illegal. Parties get even more wild on sandbars.

South Beach is the most popular, crowded and liveliest section of Miami Beach. Visitors who stay in North Beach or Mid-Beach often venture down to South Beach for people watching, bars and nightlife, and to experience the vibe.

South Beach is also called SoBe for short, in case you see that reference and wonder what it means.

One of the best things to do in South Beach is to lounge on the beach and people watch. There are other views worth seeing, too. Cruise ships can often be seen as they enter or depart Miami, and the area offers beautiful views of the Miami Skyline from the right vantage points.

One of the best things to do in Miami Beach is to explore along the Miami Beach Boardwalk.

The Miami Beach boardwalk connects the three sections of Miami Beach, all the way from South Beach up to North Beach.

The boardwalk is a mixture of wood and concrete, depending on the location and section. Some sections of the path are beachfront and have water access. There are restaurants and shops along the boardwalk for snacks and places to rest.

The boardwalk is best explored in the mornings or evenings, and not during the hottest parts of the day when the sun is high overhead. Some sections of the boardwalk do have shaded areas, but it’s best to explore when it’s cool.

Miami Beach has been a popular vacation spot since the 1800s, especially for northern residents who came to the region to escape cold northern winters. Miami beach incorporated and became a city in 1915.

Development in Miami Beach began in the late 1800s when real estate developers began arriving from the north and trying to attract other real estate speculators.

Early settlers also tried to use the island for agriculture, including failed attempts at coconut plantations and avocado cultivation. Miami Beach grew immensely during the Florida Land Boom of the 1920s.

Over the centuries real estate developers have used environmentally destructive dredge-and-fill construction methods to build the island to approximately twice its original size.

Before it was developed the island of Miami Beach was a natural barrier island. It was covered in mangroves and wetlands which helped protect the coastline of mainland Florida from hurricanes, storm surge and erosion.

Today Miami Beach, and Miami in general, are extremely vulnerable to hurricanes and flooding, partially because of environmental alterations and destruction, and partly due to rising sea levels and climate change.

There is a thriving and healthy LGBQT community in Miami Beach. It has a long history of lifestyle acceptance and was a hub for the gay community during the 1980s.

Getting Around Miami Beach

It can be very difficult to drive in Miami Beach.

The traffic is almost always crowded and congested, partially due to the geography of the island and because there are only three causeways that enter or exit the island of Miami Beach.

Roads in Miami Beach are often narrow. Many areas of Miami Beach are easy to navigate without a car. Some areas are walkable. Taxis and rideshare services like Uber or Lyft are also good ways to get around the area. On the downside, Miami Beach is almost always hot and humid, so many people dislike walking because they become drenched in sweat.

Miami Beach also has a free trolley system which can be used to get around. There are also bike share services and other options to avoid using a car or walking.

Parking is also extremely difficult to find, and expensive when it is available.

People who stay in resorts or hotels in Miami Beach are often surprised to learn that parking is either not included, or is a very expensive, often mandatory, extra charge. Some hotels and resorts force guests to use valet parking.

Some of the best places to park in Miami Beach are city-owned parking garages. Their prices are often cheaper than privately owned parking options.

Many visitors use city-owned garages instead of hotel or resort parking to save money.Public parks can also offer excellent parking spots and often have nice beach access points.

The City of Miami Beach publishes an online guide to help find parking.

The best time to visit Miami Beach is in the spring, especially around March until May. The temperatures are best during this time frame; it’s warm enough to swim and sunbathe, but the intense Florida summer has not yet begun.

Many people think that summer is the worst time to visit South Beach, and south Florida in general. The months from June until October are guaranteed to be hot and humid.

This is also Florida’s hurricane season, so vacation plans may be interrupted or ruined by hurricanes.

There are almost daily thunderstorms in the late afternoon during the summer months. They often come with heavy rain and wind. Afternoon storms can be very intense, but they are usually pretty short-lived.

Many locals like the storms because they can drop temperatures considerably, and beaches are usually much less crowded after storms; the sun often comes back out shortly after the storm passes.

The winter in Miami Beach is a lovely time to visit. Temperatures are cool and mild, but still usually warm enough to swim or sunbathe.

The downside to visiting during the winter is that everything is more crowded. Reservations for hotels and restaurants will be harder to secure, and prices are almost guaranteed to be higher due to the increased demand.