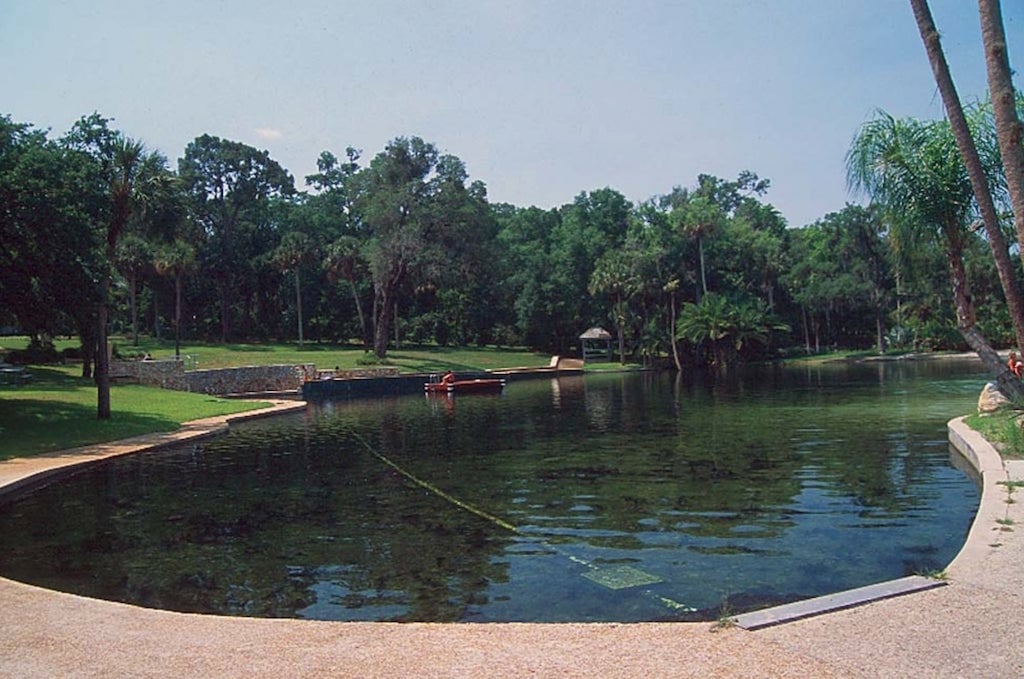 Sanlando Springs is a natural spring near Orlando, in central Florida.

In the past Sanlando Springs was a major regional attraction.

For much of the 1900s, Sanlando Springs was one of the most popular things to do near Orlando. Natural springs were especially in the summertime when they were the only refuges from the hot central Florida heat.

Today Sanlando Springs is a privately owned spring, and is not open for public access.

Sanlando Springs is one of the most beautiful springs near Orlando. It is a second-magnitude spring, and has a powerful spring flow.

After rising from the spring vent, the spring water forms a large swimming hole and pond. The pond measures approximately 180 feet wide and 200 feet long.

The Sanlando Spring swimming hole has been developed with stone and concrete retaining walls in some areas.

The walls help prevent shoreline erosion, and to maintain the spring pool and swimming hole.

The spring basin is partially dammed by an artificial dam, and has a small sand beach in one section.

After being pooled in the swimming hole, spring water from Sanlando Springs eventually flows into the Little Wekiva River.

There is a swimming platform in the middle of Sanlando Springs which is used for swimming, playing and jumping.

In the past Sanlando Springs had a diving board and a large water slide, but they have been removed.

Sanlando Springs is located in an unincorporated section of Seminole County, near the town of Longwood, a suburb of Orlando.

Sanlando Springs is located inside “The Springs” a private gated community near the city of Longwood.

The spring is located behind “The Springs” community clubhouse.

Sanlando Springs cannot be accessed by the public, unless accompanied by a resident of The Springs community, or other permission.

Sanlando Springs has a long history of use. It is a beloved spot, and is the birthplace of favorite memories for generations of native Floridians.

Historical documents trace the history of Sanlando Springs back to the 1800s. It was also used by native Americans long before any modern records were kept.

Hoosier Springs, along with nearby Palm Springs and Shepherds Spring, were major attractions during Florida’s first real estate boom. Wekiwa Springs is also nearby. Rock Springs/Kelly Park is also in the region.

Florida’s springs were popular for a variety of reasons.

Before air conditioning, the cool 72-degree spring water was the only relief from Florida’s summer heat.

The only other refuge was Daytona Beach, the closest beach to Orlando.

The springs were also valued for their high mineral content, and as a “healing spring”, as Warm Mineral Springs is today.

The springs’ high mineral content was believed to have powerful health and healing benefits.

These health claims were especially powerful because many of Florida’s earliest settlers were elderly and ill people.

The unhealthy settlers came to Florida in search of good health and healing from the Florida heat, and mineral springs.

Sanlando Springs was an important staple of the community.

Over the years the spring had a variety of attractions which were exciting at the time, including a large water slide, a diving board, and evening dances for young people.

In the 1800s Hoosier Spring was popular, along with Palm Spring, with travelers who stopped at a nearby train station. Palm Spring is included in railroad maps and brochures from the time.

Haithcox renamed Hoosier Springs to Sanlando Springs, which was a combination of Sanford and Orlando.

Hathcox promoted the newly renamed Sanlando Springs and made it into a regional attraction. He built up the swimming area, added additional facilities, and installed a 50-room hotel.

The “Sanlando Tropical Park” was a luxurious spot. Along with its 50-room hotel, Sanlando had an olympic-sized swimming pool, bath houses, and lush landscaping with tropical plants.

Amid the excitement and speculation of Florida’s land boom, Sanlando Springs was an immensely popular spot.

When the Florida land bubble popped, Sanlando Springs went into foreclosure, along with most of Florida in the Great Depression.

The land developers restricted public access to the spring, and only residents and guests of the gated community were allowed inside.

Symphony at The Springs

Today Sanlando Springs gets much less use than it did in the past, since it is closed off for public use.

Still, Sanlando Springs is still used for at least some community events today.

Every year in May the Orlando Philharmonic performs a “Symphony at the Springs” at Sanlando Springs. The performances draw large crowds. More than 2,000 people have attended some past performances.

“The three mineral springs located just west of here along the Little Wekiva River are its main source of water.

Palm Spring, flowing clear, separated a small distance from the tea colored water of the river. It was the most attractive of the three springs and gave its name to the early settlement that developed in the area (1870-1900).

Purchased by Lester Beeman of the chewing gum family in the early 1920s, he enhanced the spring with a cement wall that enlarged the swimming area.

Hoosier originally had the dark water of the river passing adjacent to the spring.

In 1926 Frank Haithcox purchased Hoosier, renamed it Sanlando, cemented and enlarged the area around the spring, raised the water level with a dam and diverted the stained Wekiva.

He added a bath house surrounding a separate cement pool, filled daily with fresh spring water. In the 1930s the swimming area at the spring was greatly enlarged, a tall slide was built, and a large sand beach created along one side.

Picnic pavilions and an outdoor terrazzo dance floor were added, and with the landscaping the enhanced Sanlando Springs became the year round recreational destination of the area.

Shepherds, further downstream on the west side of the river, were not accessible. Never developed, it was a favorite wilderness camping area for the Boy Scouts.

In 1970 the three springs were purchased, Shepherd’s was renamed Starbuck, and all three became part of “The Springs” subdivision. They are no longer available to the public.”