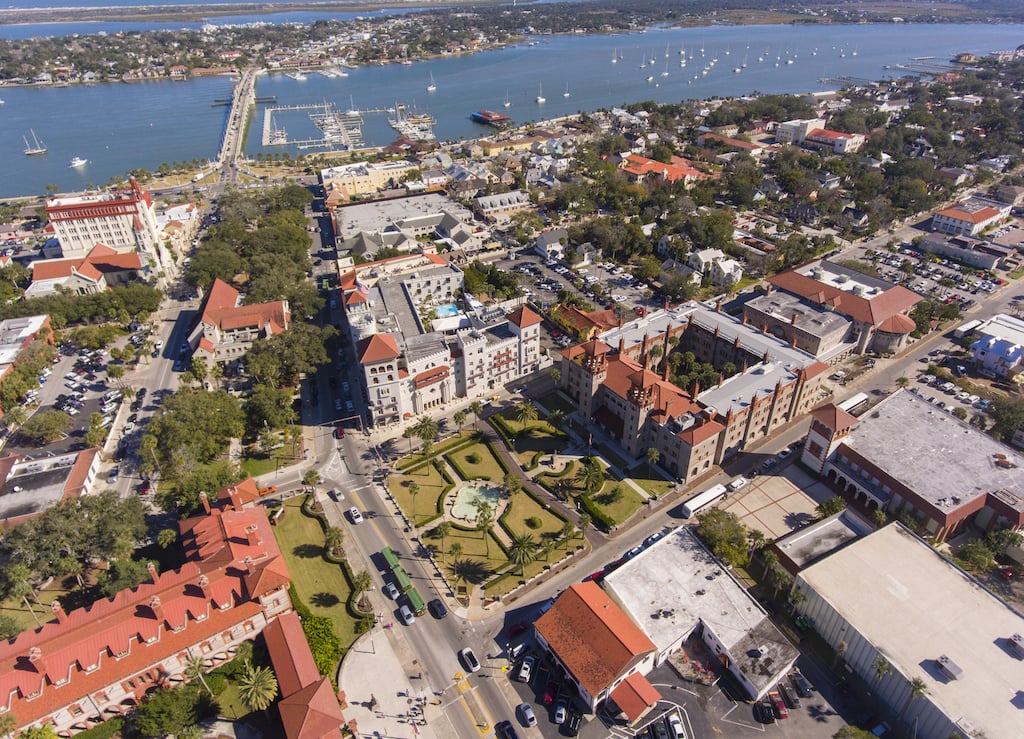 St. Augustine is located on the northeastern coast of Florida, approximately 40 miles south of Jacksonville and approximately 122 miles north of Orlando.

St. Augustine is a waterfront town, and sits along the banks of the Matanzas River.

St. Augustine has a rich and fascinating history. History is a point of pride for the small city, which brands itself “America’s Oldest City”.

St. Augustine is the oldest European colonial city in the U.S. to be continuously inhabited.

The settlement of St. Augustine was founded by the Spanish in 1565. It was first named San Agustin after Saint Augustine, an early Christian philosopher.

Many visitors are surprised to learn that the city of St. Augustine is significantly older than the United States itself.

By the time the U.S. declared independence from Great Britain in 1776, St. Augustine had already been continuously inhabited for 211 years.

St. Augustine served as Spain’s capital city in the region until Great Britain assumed control of Florida in 1763.

St. Augustine later became the capital city for Britain’s “East Florida”, before returning to Spanish control, and finally becoming part of the United States in 1821.

The city of St. Augustine has been an important historical site for American history.

St. Augustine was occupied by both Union and Confederate soldiers during the Civil War, although no battles were fought in St. Augustine.

Enslaved people were granted freedom if they could reach St. Augustine, converted to catholicism and declared loyalty to the King of Spain.

In the late 1800s St. Augustine began accepting some of Florida’s first snowbirds as a tourist and retirement destination.

St. Augustine gained a reputation as a good place for wealthy northerners to “winter in Florida” to escape cold, snowy northern winters.

Some historical resorts have survived to present-day, including the lavish Lightner Museum, which was formerly Henry Flagler’s luxurious Hotel Alcazar.

The St. Augustine Movement was led by Dr. Martin Luther King and other civil rights leaders who organized peaceful protests to end segregation in St. Augustine. These protests were important for the passing of the Civil Rights Act in 1964.

St. Augustine has several historical locations and monuments which can still be visited today.

One of the most exciting historical sites is the massive stone fort, Castillo de San Marcos, which is the oldest stone fort in the United States.

How did St. Augustine Get Its Name?

St. Augustine was named after “Saint Augustine”, an important Christian philosopher from north Africa, what is now known as Algeria.

Saint Augustine was deeply influential for his time. He is described as the first “medieval man” because he helped lay the foundation of medieval Christian theology, which replaced paganism which was dominant throughout Europe.

St. Augustine is the patron saint of brewers, printers, and theologians.

St. Augustine is the patron of brewers because he struggled with various forms of “unchristian” behavior for much of his life, and turned to religion after many years of “loose living“.

He is also the patron of printers and theologians because his philosophy and writing helped usher in a new era of “modern thought” in his time.

St. Augustine is a popular tourist destination because of its history, family-friendly beaches, and romantic resorts.

There are several options for getting to St. Augustine. There’s a small airport located near St. Augustine, approximately 10 minutes from the city.

Jacksonville and Daytona Beach both have major airports, each are approximately 50 minutes away from the city.

For those driving, St. Augustine is easily accessed from major interstates like I-95 or I-75.

Saint Augustine is also a popular destination and place to stop for boaters who cruise Florida aboard private vessels.

There are many things to do in St. Augustine for both visitors and locals.

Both beaches are popular with families who visit St. Augustine who may need a break from history and museums.

There are also many restaurants, bars and restaurants in St. Augustine to suit any taste.

St. Augustine’s rich history appeals to many adults, but there are also fun, kid-friendly things to do, including:

St. Augustine is also a great place for couple’s getaways, weddings and other romantic occasions.

St. Augustine has many excellent resorts and spas in the area, along with cute bed and breakfasts.

History buffs will want to visit St. Augustine’s Colonial Quarter and journey through the town’s 450+ years of history. Old St. Augustine village is a block in the city’s Historic District with houses that date back as far as 1790.

Castillo de San Marcos and the Fountain of Youth Archaeological Park are also among the most popular places to visit in St. Augustine.

Saint Augustine’s Old Town district is always fun to walk through. It feels like walking back through time, although it can feel a little touristy.

The Old Town has many restaurants, art galleries and fun boutiques which are worth visiting.

St. Augustine has many activities that include ghost tours, fishing, boat and bike rentals, horseback riding and mini golf!

Residents say that St. Augustine is a nice place to live. The small city is generally safe, the area is beautiful, and weather is nice, especially in the wintr.

Weather is also one of the biggest downsides to living in St. Augustine. Northeast Florida is extremely vulnerable to hurricanes, flooding and heavy rainfall. And, the hot, humid summers can be miserable for people who dislike heat and humidity.

Residents say they love the charming, small-town feel of the city. Residents also enjoy benefits found in large cities because of St. Augustine’s proximity to Jacksonville, good beaches and other local attractions.

Residents in St. Augustine take pride in their community, and locals take special care to preserve its historical legacy, while enjoying tourism’s boost to the local economy.

As with any place, there are downsides to living in St. Augustine.

Even though the local economy has grown in recent years, St. Augustine also has one of the highest poverty rates in Florida.

Many job opportunities in St. Augustine are low-paid tourism and hospitality jobs, which tend to pay less than living wages, and are vulnerable to economic shocks.

Residents generally warn that road traffic can be difficult during busy tourist seasons. Commutes can be minutes, or hours-long, depending on the day or season.

The narrow, historic roads in downtown St. Augustine are particularly vulnerable to traffic and congestion because of high vehicle traffic and constricted roadways.

St. Augustine is a lovely small town in Florida.

St. Augustine offers a rare combination of rich history, beautiful nature, nearby beaches and family-friendly things to do.

It also offers residents a small town charm, plus the convenience of “big city” perks within a reasonable commute.