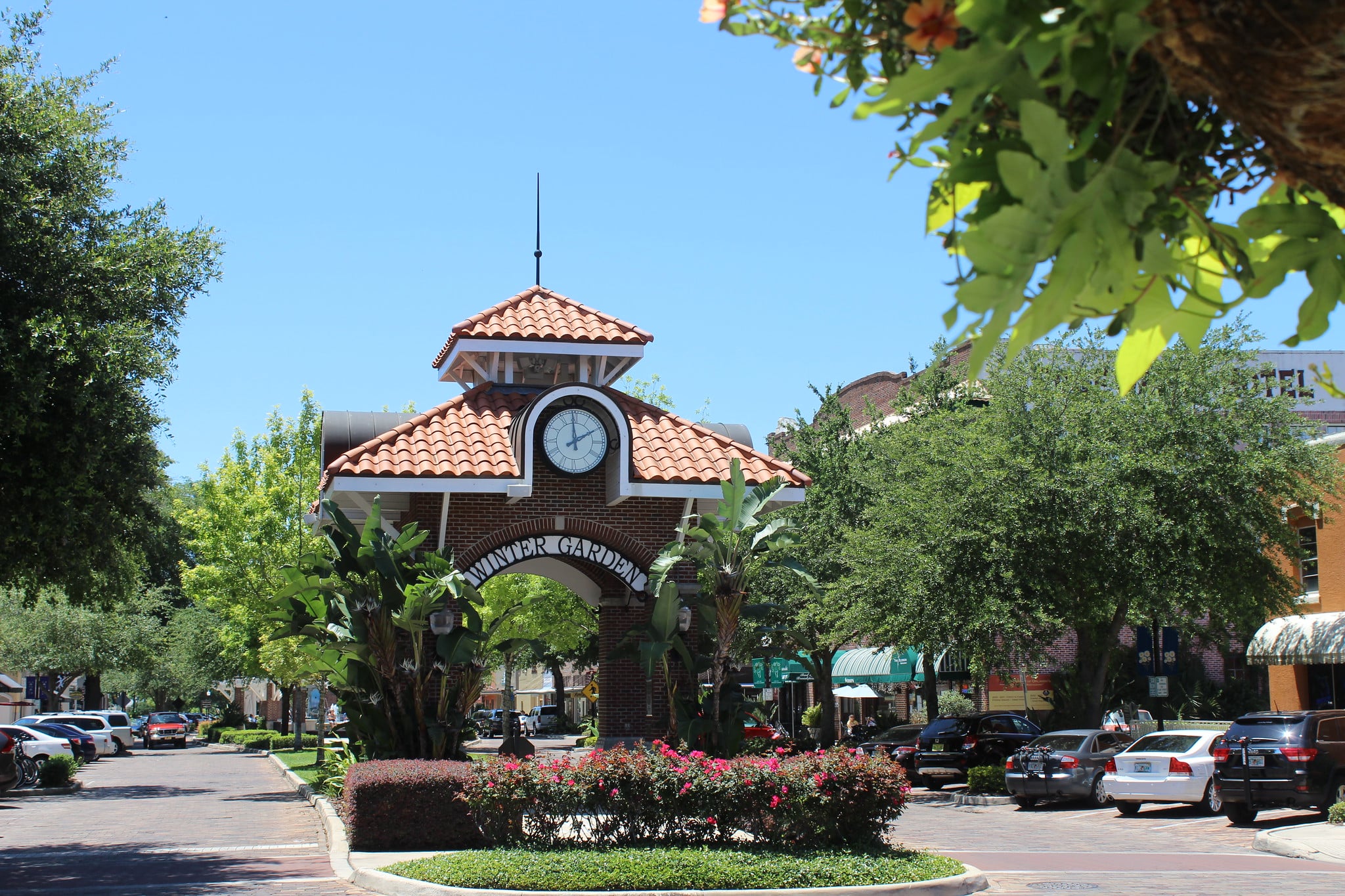 Winter Garden, Florida is a small, charming city located on the outskirts of Orlando.

It sits on the southeast shore of Lake Apopka, and is often considered to be the easternmost suburb of Orlando. It’s home to just over 46,000 residents.

Winter Garden is located inside Orange County, Florida, and is part of the greater Orlando metropolitan area. For statistical purposes, Winter Park is included in the Orlando–Kissimmee–Sanford, Florida MSA (Metropolitan Statistical Area).

Two major highways run through the Winter Garen; Florida’s Turnpike and Highway 50. Both highways are busy arteries which connect Winter Garden to the heart of Orlando.

According to Google Maps, it takes about 20 minutes to drive the 15 miles from Winter Garden to Orlando’s Central Business District. Of course, this varies and will often be much longer due to Orlando’s famously bad traffic and congestion.

Many residents complain that highway construction seems to be never-ending.

Like many communities in central Florida, Winter Garden’s story began in the 1850s.

Its first settlers made camp on the banks of Lake Apopka. At that time, they originally named their town Beulah.

The local economy was supported by agriculture, especially orange groves and vegetables.

In 1908 Winter Garden incorporated, and officially became a city. It experienced steady growth, with occasional bouts of rapid population growth. By 1920, approximately 1,000 people lived in the city.

Tourism has always been important to central Florida, including Winter Garden. Then and now, people were drawn to its warm weather and the promise of easy living. They flocked southward to escape harsh northern winters and absorb Florida’s amazing natural beauty, including Lake Apopka.

Lake Apopka is one of the best things to do and experience in Winter Garden. It’s a very popular tourist draw for boating, fishing, water sports and enjoying nature. The fishing is particularly good; it is known as the ‘Largemouth Bass Capital of the World.’

The Downtown Winter Garden Historic District has a nice mix of restaurants, shops, and several museums. The SoBo Gallery and Art Center is the most prominent cultural institution in the city.

Large swaths of Winter Garden’s downtown have been preserved, and have retained their historical Florida charm. The downtown historic district was added to the National Register of Historic Places in 1996.

The Winter Garden Farmer’s Market is also a popular thing to do in Winter Park. On Saturday mornings it brings together shoppers and the local farming community. The market is very well done, and has won major national awards.

One new attraction enjoyed by the residents and visitors of Winter Garden is the West Orange Trail, which crosses Florida and runs 250 miles from coast to coast. It passes right through the core of Winter Garden.

There are many things to do in Winter Garden, and it’s a great base for exploring Orlando. It’s centrally located, and gives convenient access many of central Florida’s best attractions.

Crucially, it’s very close to Orlando’s major theme parks. The Wizarding World of Harry Potter is just next door, along with Universal’s Islands of Adventure.

Is Winter Garden a good place to live?

Overall, Winter Garden is a very nice place to live. Still, like any place, there are a some pros and cons of life in Winter Garden.

Winter Garden is a very safe place to live, especially compared to some other places in Florida. Crime is lower than the national average according to public data sources, and the rate of burglaries in the city is less than half of the national average.

Winter Garden is a relatively affluent community, especially when compared to the greater Orlando metropolitan area. The median household income is $64,683 and the average property value is over $250,000.

One con of living in Winter Garden is that its cost of living can be quite expensive, especially relative to local wages and earning potential.

According to some sources, the cost of living in Winter Garden is 14.2% higher than the national average. Rent is particularly expensive, especially for such a small city.

All in all, Winter Garden is an interesting community. It has a lovely blend of qualities, and a unique character.

Like many of the best suburbs of Orlando, Winter Park offers residents a nice balance between city life and small-town peace and quiet.

Its residents enjoy the benefits of thriving, metropolitan Orlando, and the charm of old Florida living.