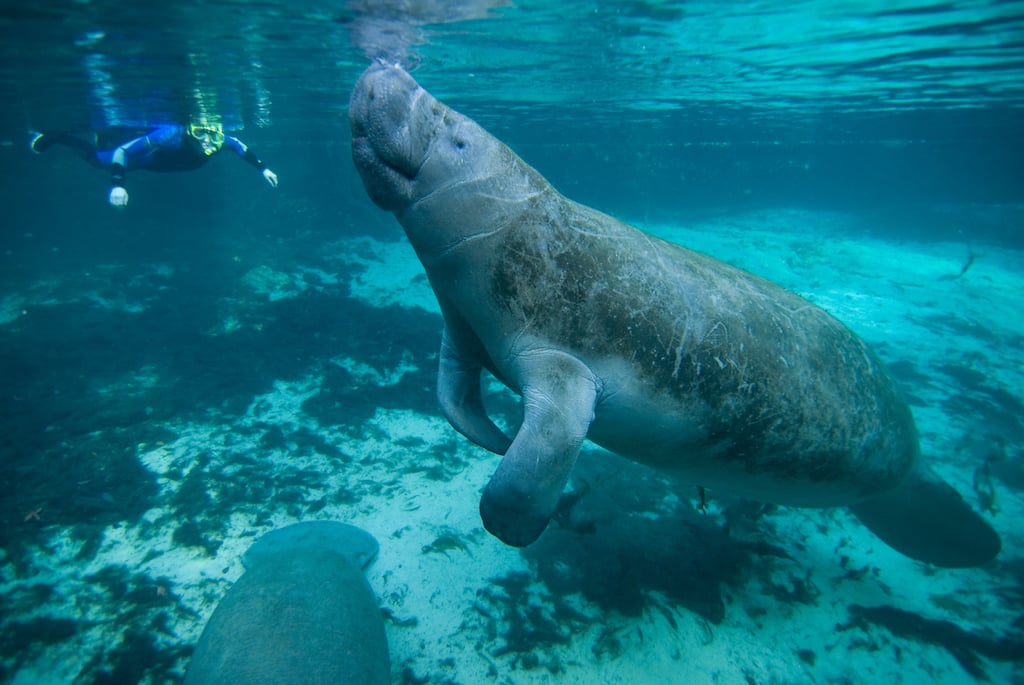 The city of Crystal River is located on Florida’s gulf coast in western central Florida.

The small city is located within driving distance of several of Florida’s largest metropolitan areas, including Tampa, St. Petersburg, Orlando and others.

Smaller towns and cities near Crystal River include:

Crystal River is one of the last remaining “Hidden gems” in Florida. It’s a popular day trip for many Florida locals, and for people visiting larger nearby cities in Tampa Bay and Orlando.

Crystal River appeals to people who are interested in “Natural” Florida rather than “Artificial” tourist attractions like theme parks.

Citrus county – where Crystal River is located – is the only place in Florida where it’s legal to swim with manatees. Only passive observation is legal. Any other form of interaction, including petting, is illegal.

Locals lobby hard to keep the tours because they’re a tourist attraction. A few powerful groups and individuals make large profits from the animals.

Wildlife experts agree that swimming with manatees is not good for their long-term survival because it changes their natural behavior.

Human interaction makes it more likely that manatees will die from a boat propeller or from cold-water exposure when they’re scared from their warm-water refuges.

Even if manatee interactions seem harmless, cute or even enjoyable, the huge number of interactions add up to change manatees’ behavior in dangerous ways for the manatee.

If you just want to see Three Sisters Spring, and are not concerned with seeing manatees in the water, the best time may be during pleasant “shoulder” season months in the fall and spring, before or after “Manatee Season”.

Outdoor activities like kayaking are often best during cool weather in the late fall, winter and early spring.

Migratory birds will be in the area, and the weather will be more comfortable and not as hot and humid as during the summer.

For seeing manatees, the best time to visit is during the coldest months of December, January and February.

Manatee sightings do occur as early as November and as late as March, but they’re less concentrated when the weather is warm.

During warm weather manatees leave the spring refuges and spread out into the Gulf of Mexico, rivers and other local waterways to forage and eat grass.

The dates are approximate, and may be extended due to specific weather events and cold temperatures.

Crystal River is located in a quiet, natural part of Florida known as the Nature Coast.

The rural region is known for its “Old Florida” attractions, rather than flashy, modern tourist destinations like Orlando or Miami.

Popular things to do in Crystal River include:

Crystal River is located in a very active area for karst geology and natural springs.

There are approximately 70 natural spring vents in the Kings Bay Springs Group and nearby vicinity. Many of the spring vents are found underwater on the seafloor of King’s Bay.

King’s Bay is a large spring-fed body of water and a connected network of waterways. The spring water remains a constant 72-degrees year-round.

Manatees come to the warm spring waters during fall, winter and early spring, when the Gulf of Mexico becomes too cold for them to survive.

Manatees are also commonly seen in other areas throughout Kings Bay and throughout the region, including the Chassahowitzka River area.

Some areas around Crystal River are designated as manatee refuge areas.

Manatees need peace and warmth for survival. It’s essential that manatees are not disturbed in any way.

If manatees are scared away from warm water refuges they may leave and die from cold water exposure.

These areas are often marked with buoys and ropes. Access to these areas is legally prohibited to protect the manatees, and ensure their peace and safety.

Three Sisters Spring is named after three springs which comprise the “spring group”.

A spring named “Idiot’s Delight” is the main spring, and is connected to two springs; “Big Sister” and “Little Sister”.

Swimming is allowed in Three Sisters Spring year-round, but access may be closed when manatees are present.

There are quite a few things to know before visiting.

There is no parking at the land section of the refuge. Visitors must park elsewhere. The easiest option is to park at the visitor center and ride the trolley.

There are two ways to experience Three Sisters Spring: by land, or by water. They are totally separate and different experiences!

It is never possible to swim or access the water via the boardwalk entrance. The opposite is also true. Swimmers and kayakers cannot access the land around the spring, either.

Paddle craft are allowed inside Three Sisters Spring outside of “Manatee Season”.

Kayaks and paddle craft are not allowed in the spring during the winter “Manatee season” which lasts from approximately November 15th until March 31st.

Those dates may be extended when necessary to protect manatees during cold weather. Water access to Three Sisters Spring may be restricted when manatees are present.

One of the best ways to experience Three Sisters Spring is via land. There is a beautiful boardwalk built around the spring, and a network of paths beside the springs.

The boardwalk offers excellent views of the beautiful springs, and is an easy way to see manatees when they are present during cold weather.

Continue Reading:   The Best and Worst Times to Visit Florida

U.S. Fish and Wildlife Service volunteers are present at the boardwalk to provide information, guided walking tours during manatee season.

The land-based boardwalk and refuge is also an excellent place for birdwatching. This PDF guide provides information for birders. Crystal River Birding Brochure

The park is a popular spot for swimming on a modest beach, launching kayaks, picnicking, a playground, and more.

The park is located within a reasonable walking distance of other parts of Crystal River.

Amenities at Hunter Springs Park include:

Nearby Things to Do

Other natural attractions near Crystal River include:

Manatee tours in Crystal River come with severe downsides for manatees and people.

The small waterways can get chaotic at times. Dozens of boats and swimmers might be in a small area, creating a dangerous situation for both visitors and manatees.

Many of the “Manatee tour” boats have been caught harassing manatees.

If you witness any sort of questionable behavior, please consider taking photos or video (If it’s safe) and report it. The Save the Manatee organization publishes excellent information for filing reports.

Living in the city

Living in Crystal River is lovely, according to locals, but there are some challenges.

Many locals are angry about damage done to the region’s natural ecosystem, including rampant overdevelopment, pollution and generally unsustainable growth at the expense of Florida’s environment.

Many residents of Crystal River express frustration with annoyances which come from tourists, especially traffic, crowding and inconsiderate behavior by tourists.

Like all of Florida the cost of living in Crystal River has risen excessively in recent years, especially compared to the relatively stagnant earning power of local residents. Affordable housing is in scarce supply and many residents have struggled to keep up with rising living costs.

Residents of Crystal River largely depend on the ecotourism industry, especially manatee tours in the fall, winter and spring. There not many other job opportunities.

The area of Crystal River is exceptionally vulnerable to flooding, storm surge and hurricane risk. The city has been destroyed by flood waters in the past.

The town’s economic base is also vulnerable to storms because clean-up and storm disruptions also interrupt the town’s revenue base from lost tourism revenue.

Crystal River has a fascinating history.

Human inhabitation of Crystal River dates back more than ten thousand years, to the earliest humans who existed in North America.

The region has been continually inhabited for much or all of the time since, and is the site of many human and animal archeological discoveries.

The history of Crystal River stretches back to the Pleistocene Era, when Florida was much different than it was today.

Ocean levels were much lower because the Earth was experiencing an Ice Age. Florida’s climate was much cooler and drier than it is today.

The Gulf of Mexico and Atlantic Oceans were hundreds of miles further offshore because ocean levels were lower. Crystal River would have been located deeply inland on the Florida peninsula.

Evidence suggests that the natural springs may have been important sources of fresh water which would have attracted both humans and large animals, which drank the water and were hunted by humans.

Many artifacts, including shell mounds, have been discovered in the area. Archeological finds pre-date Spanish “discovery” by hundreds or thousands of years.

Prehistoric animal fossils, including mastodons, giant armadillos and large land tortoise were found during construction of the nearby Crystal River nuclear power plant, among others.

Crystal River grew in the late 1800s after the end of the U.S. Civil War, along with the rest of Florida.

Northern settlers came to the region, and much of central Florida, in search of affordable land and a warm climate.

Crystal River grew rapidly after railroad tracks were built in 1888, along with other regional towns like Cedar Key.

Railroad transportation was a cutting-edge technology at the time, and opened many areas of Florida up for settlement for the first time.

Along with an increasing resident population, the railroads brought Florida’s first waves of large-scale tourism.

Is Crystal River Florida worth visiting?

Are there alligators in Crystal River in Florida?

There are alligators in Crystal River, and surrounding waterways. Alligators almost always tend to avoid people and crowds, but visitors should use caution and take appropriate safety precautions.

What is Crystal River Florida known for?

Crystal River is known for its beautiful springs, waterways and excellent nature. It is especially known as the “Home of the Manatee” and a variety of manatee-related tours, including the controversial practice of swimming with manatees.

Is Crystal River a good place to live in Florida?

Crystal River is a good place to live for people who love the water, nature and the outdoors, combined with a traditional “Old Florida” small-town feel. The city of Crystal River offers a nice balance between rural, quiet small-town life and enough of a “town” to avoid feeling isolated. The largest major downsides to living in Crystal River is that the town has very limited employment opportunities outside of the tourism industry. Residents also dislike seeing the natural environment destroyed by overdevelopment.

Crystal River is a lovely coastal town with excellent nature-viewing opportunities. It’s well worth a visit if you’re in the area.

We hope you found this guide helpful. If you have any questions, suggestions or if we left anything out, please let us know!