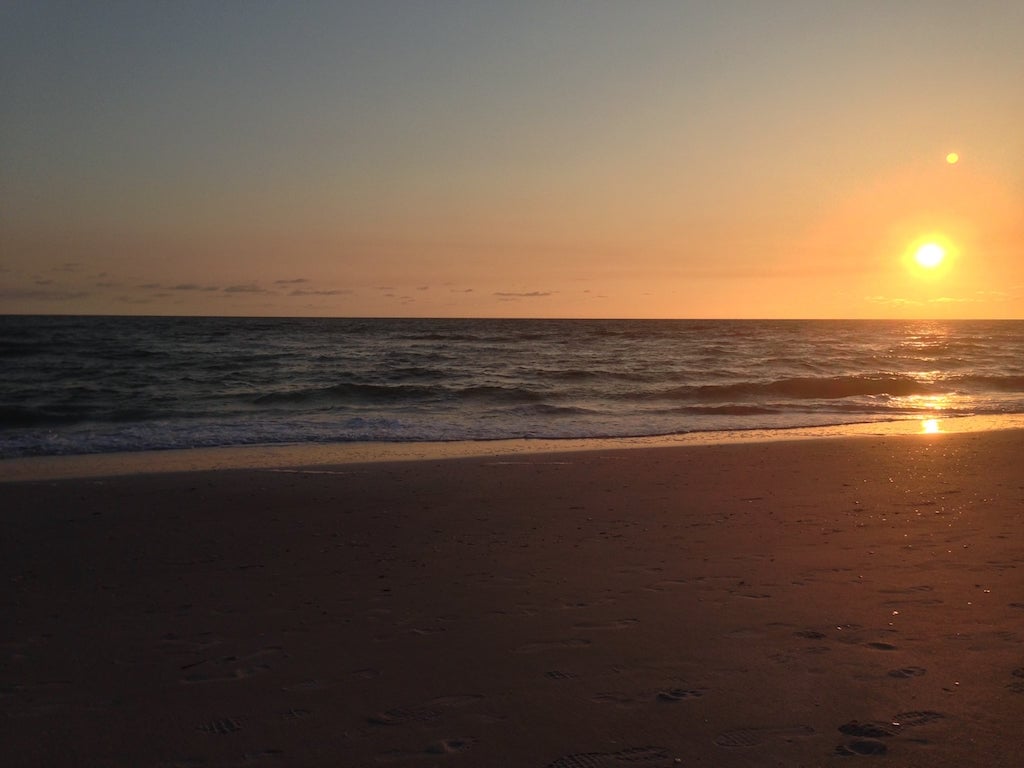 Because of its location in southwest Florida, Bonita Springs is especially popular among people who want to explore Florida’s beautiful beaches, coastline, nature and outdoors.

Bonita Springs is a sleepy town, but it’s a popular destination for tourists, snowbird residents and retirees. Bonita Springs has a lot to offer, including access to some of the best beaches in Florida.

The community of Bonita Springs is heavily defined by local waterways, including the Gulf of Mexico, wetlands and rivers.

The city of Bonita Springs is located on both the mainland of the southwest Florida gulf coast, and on a series of barrier islands.

The city sits along the shores of the Gulf of Mexico, and on the southern shores of Estero Bay, which is a protected bay between the Florida mainland and a series of long, narrow barrier islands.

Bonita Springs is also bisected by the Imperial River, which cuts through the center of Bonita Springs and drains out into Fish Trap Bay.

Bonita Springs is located near several other cities in southwest Florida.

The cities of Cape Coral and Fort Myers are located north of Bonita Springs. Fort Myers is the commercial center of Lee County and the region of southwest Florida.

The cities of Naples and Marco Island are located south of Bonita Springs.

Fort Myers Beach on Estero Island lies between the two, and is a great spot for fishing and other water sports.

Airports that serve Bonita Springs include:

Bonita Springs’ other airport options are all over 100 miles away;

Bonita Springs is a popular place for many visitor types, including local Florida travelers, couples, honeymooners, family vacationers, spring break visitors and international tourists, and others.

Most visitors come to Bonita Springs in search of low-key, peaceful relaxation rather than an exciting party destination.

Bonita Springs is more often a place for visiting relatives and enjoying beautiful beaches and the outdoors.

Bonita Springs is a popular destination for snowbird residents. As with much of Florida, people from colder climes flock to Bonita Springs in winter to enjoy the warm weather.

More recently Bonita Springs has seen a rise in Sunbirds.

Sunbirds are seasonal residents who live primarily in a warm climate, and migrate north during summer months to escape uncomfortably hot summers.

This is in contrast to traditional snowbirds, who primarily live in the north and head south to escape uncomfortably cold winters.

Many seasonal residents choose to live in Florida as their primary residence for a variety of benefits, including:

Bonita Springs is a great place for families to visit. There is a wide variety of family-friendly activities and the community generally feels easy-going and safe.

Visitors should be aware that Bonita Springs can get busy during peak tourist season, which lasts from approximately January until April.

Still, Bonita Springs is usually quieter than many of Florida’s other beach towns, even in the height of snowbird season.

Like all of southwest Florida, Bonita Springs has a sub-tropical climate. Seasons in Bonita Springs include warm, mild and dry winters and hot, humid and rainy summers.

The best time to visit Bonita Springs is from October to March as the weather is calmer and there is less rain.

The worst time to visit Bonita Springs is from May to September due to the hurricane season, oppressive heat and humidity and daily thunderstorms.

In the winter season average daytime high temperatures in Bonita Springs average between 60 to 70 Degrees Fahrenheit.

Temperatures can reach 90 Degrees Fahrenheit or more. Due to the high humidity, the head index can make temperatures “feel like” they are as high as 110 degrees F.

Bonita Springs receives, on average, between 7 to 9 inches of rain during its rainy season. It’s common to have daily afternoon thunderstorms which occur during the hottest part of the day.

The daily rainstorms are often brief, but intense, and often bring strong thunder, lightning, wind and torrential rain. The afternoon rains help cool the temperature, but increase the humidity to unbearable levels.

July is the wettest month, on average.

One of the best times to visit southwest Florida is during the “shoulder seasons” of spring and fall.

Spring and fall months, generally from about April until May and then again from October until December, offer a lovely combination of mild temperatures and reduced crowds.

These months are often quieter, and visitor groups tend to skew older, since families are often unable to travel due to children’s school schedules.

Hurricane season is in full swing between August and October, but can strike anytime between June to November. See the City Of Bonita Springs website for more information.

Things to Do in Bonita Springs

There are many things to do in Bonita Springs:

Southwest Florida’s Gulf Coast is famous for its dolphins and manatees, but it’s not just the wildlife that brings people here.

Bonita Springs is surrounded by four barrier islands. The beautiful Little Hickory Island Beach Park and Bonita Beach Park are two of the most popular.

Things to do for families in Bonita Springs

The Everglades Wonder Gardens offer a range of hands-on activities, including the chance to feed flamingos and get up close to all sorts of wildlife. Admission is $12 for adults, $7 for children and free for children under 3.

Local waterways are filled with water activities. Estero Bay is popular for water sports, including kayak and SUP paddleboard rentals.

There are a number of convenient day trips which can be visited from Bonita Springs.

There’s also a Cypress forest and other natural habitats to see what southwest Florida was like before it was paved over.

There are a number of state parks near Bonita Springs, including Lovers Key State Park and Delnor-Wiggins Pass State Park

Parts of the Florida Everglades National Park are technically located approximately 60 miles from Bonita Springs, although the visitor center and main park entrances are located more than 2.5 hours southeast, closer to Miami.

Is Bonita Springs a good beach?

Bonita Beach park is the most popular beach around and can get busy; especially at sunset. The beach is pristine with beautiful white sand and clean water; it is well worth a visit.

Entry to Bonita Springs Beach Park is free, but visitors must pay for parking if visiting by car. Parking costs approximately $2 per hour as of this writing.

Barefoot Beach was ranked the 6th best beach in the US in 2013, and often comes high on TripAdvisor’s best beaches lists.

The 342-acre Barefoot Beach Preserve is one of the last undeveloped barrier islands. It’s also one of the very best shelling beaches in Florida. The $8 entry fee means it’s quieter than other beaches in the area.

The Bonita Beach Dog Park is one of the best dog beaches in Florida. Dogs are allowed to run and play in the water off-leash.

The waters around Bonita Beach Dog Park are generally shallow and sandy, but do get deeper quickly in many areas.

The dog park has ample free parking and a dog washing station on-site.

Visitors should use appropriate caution and their best judgment and etiquette when allowing their dogs to use the dog beach.

In general, most residents say that Bonita Springs is a nice place to live, but the pros are equally balanced by downsides.

One of the biggest downsides to living in Bonita Springs, or southwest Florida in general, is that the cost of living is very high relative to local wages and earning potential.

There aren’t very many large companies in Bonita Springs, so the job market is limited. Tourism is the largest industry throughout southwest Florida, including in Bonita Springs. Most hospitality and tourism jobs are low paying and are highly seasonal.

As with the rest of Florida, the cost of housing has risen dramatically in recent years and has created a housing affordability crisis which makes life difficult for many locals.

Many retirees who relocate from high-cost-of-living states may find that real estate prices in Bonita Springs appear inexpensive, but it is high for locals who must earn local wages.

The cost of living in Florida today is much more expensive than it was in previous decades, when Florida gained a reputation as a good place to retire.

Is Bonita Springs a nice area?

Bonita Springs is much quieter than nearby places like Fort Myers and Naples, which can be a good thing, or a bad thing, depending on your preference.

The beaches are often named some of the best in the United States, and there are plenty of cultural things to see and do in the town itself.

Bonita Springs has a lot to offer when it comes to outdoor activities like wildlife viewing, bird watching, hiking trails and water sports like kayaking, paddleboarding and fishing.

The city has as an interesting modern history, as well.

Southwest Florida has been inhabited by humans for up to 8,000 years according to archeological evidence, including native American mounds and burial sites.

Calusa Indians lived and thrived in Bonita Springs when the Spanish came in 1513.

The Calusa native Americans were later decimated by European diseases, war, persecution, forced relocation and slave trading, among other struggles.

In the late 1800s Braxton B. Comer bought 6,000 acres of land around Bonita Springs, which was then called “Survey”.

Comer brought 50 families from Alabama to work his large plantation. They cultivated the land growing pineapples, bananas, coconuts and other kinds of fruit.

The name Bonita Springs was chosen after a local mineral spring which the native Americans said could heal the sick. The medicinal spring was located near Old Highway 41.

Southwest Florida languished amid cycles of booms and busts throughout the 1900s.

In the 1920s Barron Collier built the Tamiami Trail (U.S. Highway 41) which connects Tampa to Miami and the railroad. This brought a new wave of prosperity to the town.

Route 41 is the United States Numbered Highway that runs from Miami, Florida, to the Upper Peninsula of Michigan.

The highway was important as it connected Florida to the rest of the country. Even now the road is a draw for tourists.

The scenic two-lane Tamiami Trail (U.S. 41) will take you through miles of the Everglades alligator country. With epic scenery and wildlife, it’s a great tourist route to follow.

Southwest Florida experienced a surge of migration from the 1950s until the 1970s, when waves of retiring WWII veterans flooded into Florida.

Many had fond memories of Florida from their military days when they are either stationed in Florida, or passed through while receiving military training.

New technologies, especially air conditioning, combined with the opening of the new highways saw a huge rise in the population.

The city of Bonita Springs was officially established on December 31, 1999.

Bonita Springs is a lovely enclave in southwest Florida. It is a great destination for many types of visitors, retirees, snowbirds, and local residents.

For anyone who can stand the heat, humidity, mosquitoes and other downsides, it offers a lovely mix of quiet living, a nice climate, and ample sunshine to enjoy wildlife and the outdoors.

We hope you enjoyed this guide to things to do in Bonita Springs. Please let us know if we left anything out!