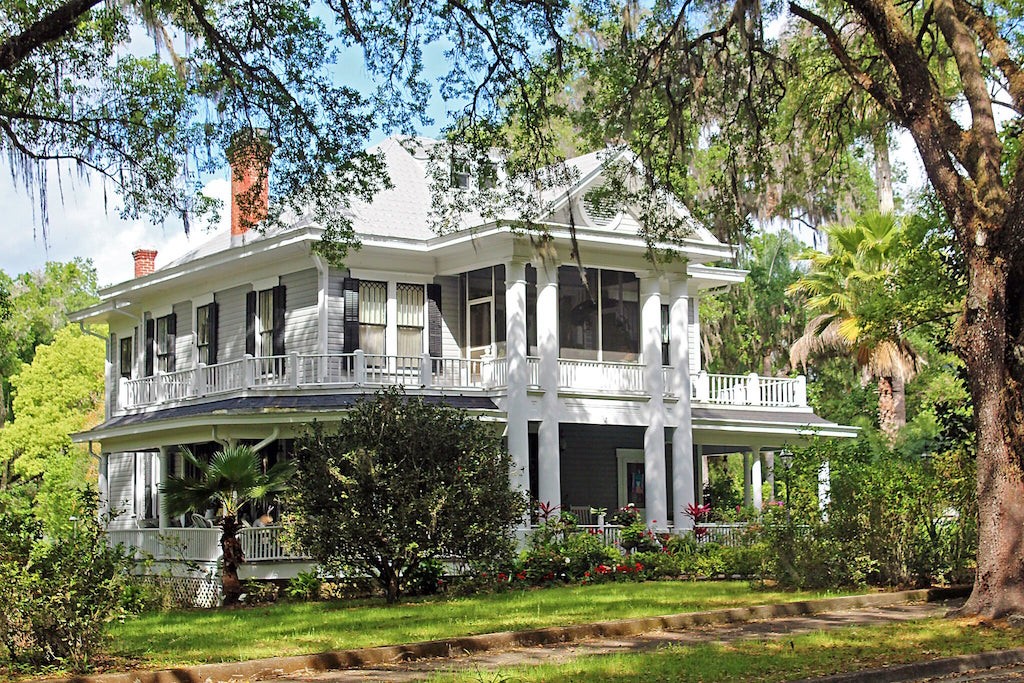 Brooksville is often called the “Real Florida” and is representative of how the state used to be decades ago.

One refreshing thing about Brooksville is that it actually has hills and elevation changes!

Many of the hills in and around Brooksville are beautiful, rolling green pastures.

Some hills are more dramatic than others, and may even catch drivers off-guard.

While it may seem silly to note the presence of hills, most of the surrounding region is extremely flat, and without any elevation changes at all.

Downtown Brooksville is a lovely place to visit.

Exploring around Brooksville feels like a step back in time.

Ancient live-oaks are draped with Spanish moss, and stately old mansions sit just as they have for the past century.

The town square of Brooksville is a great place to walk around and explore. The downtown area is quite lively for such a small, old town, and it has a nice energy.

The Hernando County Courthouse sits at the center of the downtown area, and the rest of the town radiates around it.

Where is Brooksville, Florida?

Some residents live in Brooksville and commute to Tampa, especially residents with jobs which allow for remote work and flexible commute plans.

Brooksville is served by a fast toll road, the Suncoast Parkway. The drive into Tampa can take as little as an hour, depending on traffic conditions.

Brooksville is the county seat of Hernando County.

There is a small regional airport located south of Brooksville.

What coast is Brooksville on?

Brooksville is part of the “Nature Coast” and is home to many outdoor recreational opportunities.

Brooksville is located near several springs, rivers and lakes, which are popular recreational opportunities for residents. It is also located near Florida’s Withlacoochee State Forest.

Brooksville is located near large natural recreation attractions, including:

Is Brooksville Florida a good place to live?

Yes, Brooksville is a very nice place to live! In the past Brooksville has been selected as one of Florida’s Outstanding Rural Communities.

Of course, Brooksville appeals most to people who value what Brooksville has to offer; open space, affordable country living, within commuting distance of a major metropolitan area

It is possible to live in Brooksville without giving up any of the conveniences or comforts of city life.

Brooksville has just about everything one could need, except for high-end shopping or speciality needs. And, Tampa is always just a short commute away.

Because it is such a nice place to live, Brooksville has grown considerably in recent years.

Much of the population growth has come from residents moving out of the Tampa Bay region, often in search of a slower pace of life and more affordable housing.

Although Brooksville has grown considerably, it has retained many aspects of its original charm, especially the cute downtown area.

There are some rough neighborhoods and parts of Brooksville. Many Brooksville residents live in rural settings outside of the city itself.

Some neighborhoods in Brooksville are more or less desirable than others.

Some neighborhoods, including the Summit Villas and Hillside Estates, have struggled with maintenance and crime issues in the past.

The elevation of Brooksville is approximately 194 feet above sea level.

Unlike other areas in the region, Brooksville has rolling hills which range anywhere from 100 feet to almost 200 feet tall.

The highest point near Brooksville is Chinsegut Hill, which is approximately 269 feet tall.

Brooksville has many hospitals, doctors and medical facilities.

The medical facilities are an important source of jobs for local residents, and provide essential services to the local community.

The city of Brooksville has a relatively long history, which dates back to the mid 1800s.

Settlement activity began to grow in 1840 after a military fort was built to protect settlers from Florida’s native Americans during the Seminole Wars.

Modern-day Brooksville was settled in the years around 1845.

It was a relatively lively frontier town in its earliest days, and was serviced by a popular railroad and stagecoach route.

The rail and coach lines crossed Florida to connect Tampa with the eastern river town of Palatka, which sat on the shores of the Saint Johns river.

Brooksville has had several names in the past, including Pierceville and Melendez. The town was also moved from its earlier site due to the inability to drill for freshwater.

Earlier in its history, Hernando County also had another name, and was previously named Benton County.

Brooksville, as it is known today, was established in 1856 and incorporated into a city in 1880.

According to the 2020 census, the population of Brooksville is approximately 8,890 people.

The population of Brooksville grew from 7,719 as of the 2010 census, which is a 15% population increase.

Brooksville is included in the Tampa-St. Petersburg-Clearwater Metropolitan Statistical Area.

Things to do in Brooksville

Brooksville has a number of popular events and attractions throughout the year.

There are several parks and recreational facilities in Brooksville.

The parks have sports facilities, picnic areas and multi-use walking and biking paths.

Brooksville is home to the world-renowned World Woods Golf Club.

Many people come from around Florida, and the world, to play on the excellent course.