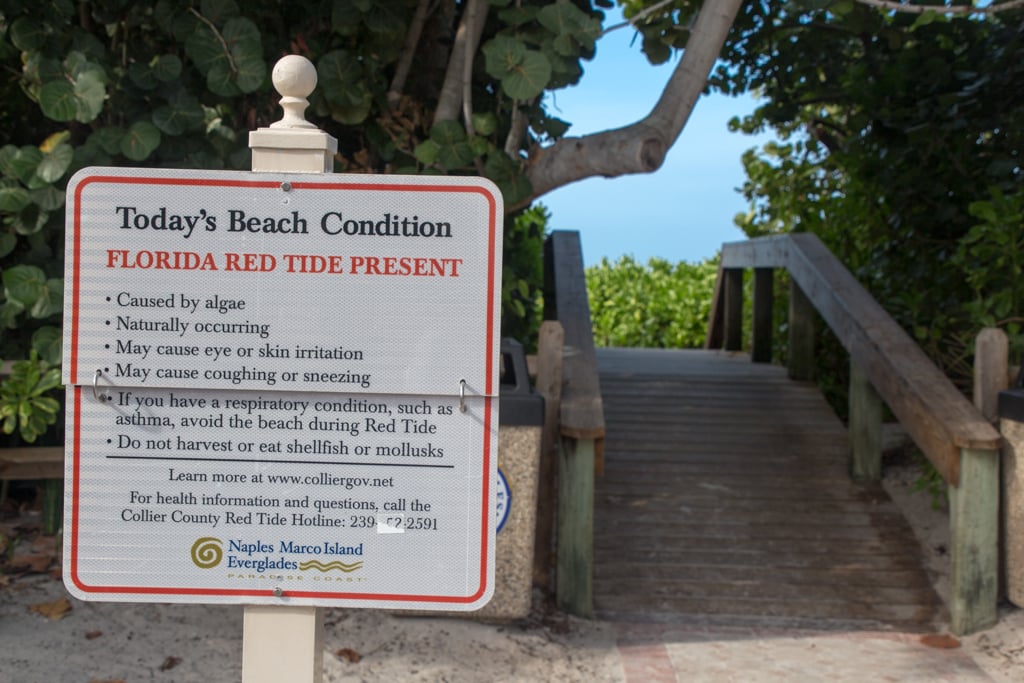 One of the worst parts of living in Florida is the ongoing problem with harmful algal blooms.

What are Harmful Algae Blooms in Florida?

A harmful algal blooms, often abbreviated as “HABs”, is an out-of-control growth of algae.

Algae blooms are often fueled by human pollution, including human and animal sewage, and fertilizer from industrial agriculture operations.

Toxic algae blooms cause serious problems for the health of Florida’s environment and residents.

Several types of harmful algae blooms occur in Florida, and there are varieties which occur in both salt and freshwater.

​​Red tide is one of the most well-known forms of harmful algae blooms.

The organism produces dangerous neurotoxins which spread into the surrounding air, water and the environment.

The name red tide comes from a noticeable discoloration in affected water. Water affected by red tide is often a dark red or brown, but can also appear as different colors.

The neurotoxins produced by Red Tide can cause serious respiratory illness, neurological dangers and poisoning, if consumed.

The neurotoxins can accumulate in sea life, especially shellfish, and can be extremely dangerous to eat.

Some people have compared blue-green algae to a soupy guacamole type consistency.

Sargassum is another form of aquatic organism that thrives in warm water and grows out-of-control as it feeds off of excessive nutrient pollution.

Beaches in Key West and throughout the Florida Keys often smell like sulfur and rot due to excessive sargassum seaweed and decomposition.

Many coastal communities in Florida have been devastated by harmful algal blooms in the past, for a variety of reasons.

Algae blooms often make local beaches and waterways unusable, which causes visitors to cancel vacations. Harmful algae blooms have led state and local lawmakers to declare states of emergencies in the past.

Small beach towns in Florida are also heavily affected, and are often harder hit because they lack the financial resources to perform expensive clean-up operations.

Algae are naturally occurring organisms, and algae blooms are natural, to a certain extent.

However, human pollution, especially in the form of nutrient pollution, is causing the “natural” occurrences to bloom into out-of-control disasters.

Florida’s harmful algae bloom problem is also caused by mismanagement of Florida’s water and environment, especially the Florida Everglades and other wetlands.

Many harmful algae blooms are a direct result of nutrient-rich water pollution, which has been polluted with nutrients from sewage, animal waste and fertilizer from industrial agriculture.

Sewage mismanagement is a common problem in all areas of Florida. The state is experiencing a water pollution crisis thanks to overwhelmed sewage treatment facilities and a huge number of failing septic tanks throughout the state which leech sewage into waterways and drinking supplies.

Florida’s Lake Okeechobee is a source of many harmful algae blooms because it is a collection-point of polluted water, and algae thrive in the warm, nutrient-rich water.

Water discharges from Lake Okeechobee often dump polluted and/or contaminated water to Florida’s east and west coasts, where it can thrive and become a danger to Florida’s beaches.

The water should be sent south to the Everglades and Florida Bay instead of being discharged to the east and west coasts.

Harmful algae blooms are also made worse by the reckless destruction of Florida’s wetlands, especially the Florida Everglades.

Wetlands throughout the state of Florida serve the environment, and residents, by acting as natural “scrubbers” and sponges to absorb and process groundwater.

Harmful algae blooms are becoming worse, and are occurring more frequently, because of mismanagement of environmental resources.

Harmful algae blooms are a serious problem throughout Florida. The effects of algal blooms have been felt throughout all of the state’s regions.

Algae blooms pose a serious threat to all of Florida’s natural resources, from our springs and aquifer, to our beautiful beaches.

Serious environmental reform is needed to help stop the root causes of algae blooms. Without a drastic change, Florida’s environmental and economic futures will surely suffer from future crises.