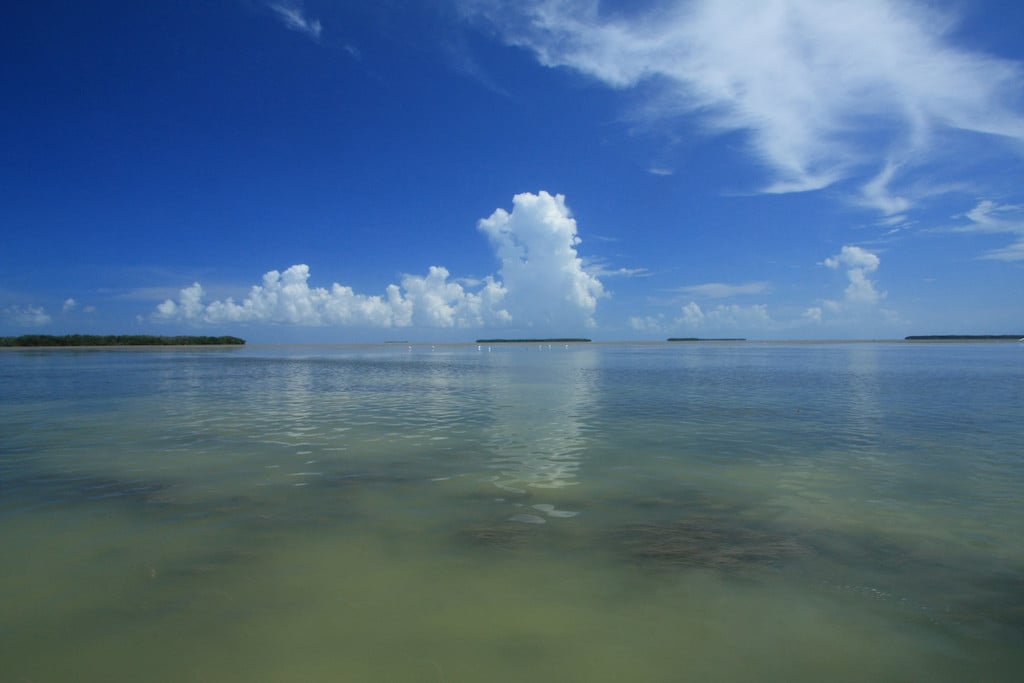 Florida Bay is a vitally important body of water in Florida. It’s located south of the Florida Everglades and Everglades National Park.

How Deep is Florida Bay?

The Florida Bay is very shallow and consists of a series of shallow, partially connected basins. The bay sits upon a shallow shelf which is part of the Florida Plateau.

The area is filled with mangrove forests, large fields of seagrass, sandbars and mudbanks, which constrict water flow.

Why is Florida Bay Important?

Florida Bay is a critical ecosystem, and is important for many reasons.

The area is an important estuary. Enormous sheets of fresh water flow south from the state of Florida, through the Everglades, and meet the salty water of the Gulf of Mexico. In the past, before human intervention, the volume of fresh water ingress was much larger.

Like all of Florida’s waterways, Florida Bay is constantly under attack from many directions.

In recent decades vast quantities of water have been diverted because of development, commercial and industrial interests. In the past 100 years, the volume of fresh water flowing through the Florida Everglades has been reduced by approximately 50%.

As water flows have diminished, many environmental problems have arisen, like hypersalinity and seagrass die-offs.

Extensive research is ongoing in Florida Bay and the South Florida Ecosystem.

Among other areas of interest, the Florida Bay area is monitored to understand important environmental questions:

The Bay consists of a series of bowls and basins, which are separated by sandbars, shoals, banks, islands and shallow areas which can be only a few inches deep.

To travel from one basin to another, boaters must navigate through complex paths and channels of deeper water.

Many of these paths are only inches deep, and are all exceptionally difficult to navigate. This is especially true during the winter dry season, when water levels are even lower.

It is very easy to accidentally run aground, or cause damage to the shallow seabed.

Many areas are inaccessible at low tide, or even during high tide. The area is a maze of shallow water obstructions.

In general, blue and green water is deeper, and brown water is shallower.

Deep and shallow water are also affected by wind and currents in different ways, so a trained eye may be able to identify shallow water by those methods.

Polarized sunglasses and lenses can be helpful for identifying shallow water.

If you’re not sure whether you can or should approach or enter an area, don’t. It’s best to avoid it altogether.

In some areas, manual, human propulsion is advised. In shallow water, manual push-poles can prevent damage to vessels, the environment and prevent wildlife trauma.

Boaters should be exceptionally careful not to run aground, as it can damage both their vessel and the sensitive underlying seafloor and seagrass. Boaters should use proper motor and propeller trim at all times.

Brown propeller wash indicates that your trim is set too low. The brown color occurs because the propeller is disturbing the underlying seabed, and blasting it with a powerful stream of water.

If you find vegetation in your propeller wash, it is a serious problem. It means that you are actively damaging the seafloor vegetation, sea grass, and organisms that live on the seafloor.

Islands in Florida Bay often sit just above the water. They are one of the only sources of dry land, and provide important habitats to animals, plants and trees.

Florida Bay, and the Everglades, are unique and important habitats.

These ecosystems are home to a high concentration of Florida’s native wildlife, including endangered species like the Florida Panther, American Crocodile, and many others.

Florida Bay is one of the only places in the U.S. where fishermen can catch bonefish, tarpon, snook, redfish, and other species in one place.

It also provides an essential habitat for a variety of birds, including migratory birds and endangered species.

Florida Bay, and the Florida Everglades, are also one of the only places where alligators and crocodiles coexist together.

Florida Bay has some of the largest sea grass beds in the entire United States. Seagrass plays an important part in the Florida Bay ecosystem in a variety of ways:

Seagrasses also form the base of the food chain, which sustains many other forms of life, including manatees.

Manatees, sea turtles and other species rely on seagrass for their primary food source. Dolphins and birds use sea grass areas as productive feeding grounds. Seagrass can also provide a base for algae and small organisms to live on.

Several types of seagrass are found in Florida waters:

Mangroves are essential to Florida Bay, the Florida Everglades, and all of Florida.

The mangroves serve a variety of important functions. Just to name a few:

Continue Reading:   Why do the Florida Keys Smell Like Sulfur?

The Florida Everglades are affected by two seasons: wet and dry seasons.

The wet season lasts from April to November, when hot and humid conditions produce large amounts of rainfall.

The wet season brings many bugs, mosquitoes, heat, and humidity. During the wet season the area is often affected by hurricanes, which dump large amounts of rain on the region.

There are also afternoon storms, which occur almost daily. These storms also dump large amounts of rain onto the Everglades and surrounding watershed.

Large amounts of fresh water are important to help maintain stable and healthy salinity levels in Florida Bay, among other things.

The dry season lasts from November to March.

During the dry season, Florida receives much less rain, and humidity levels are relatively lower than during the wet rainy season.

Bug and mosquito activity are lower. Water levels in the Florida Everglades and Florida Bay are lower during the dry season. This makes boat access more difficult.

The Florida Everglades National Park is one of eleven national parks, preserves and monuments in Florida.

There are three national parks in Florida. They are all located in south Florida.

The Florida Everglades, and Everglades National Park, cover a large area; they cover more than 1.5 million acres, and form a large part of the Florida Peninsula.

Most of the Everglades ecosystem is not accessible to visitors.

The southern section of the park is accessible via Homestead.