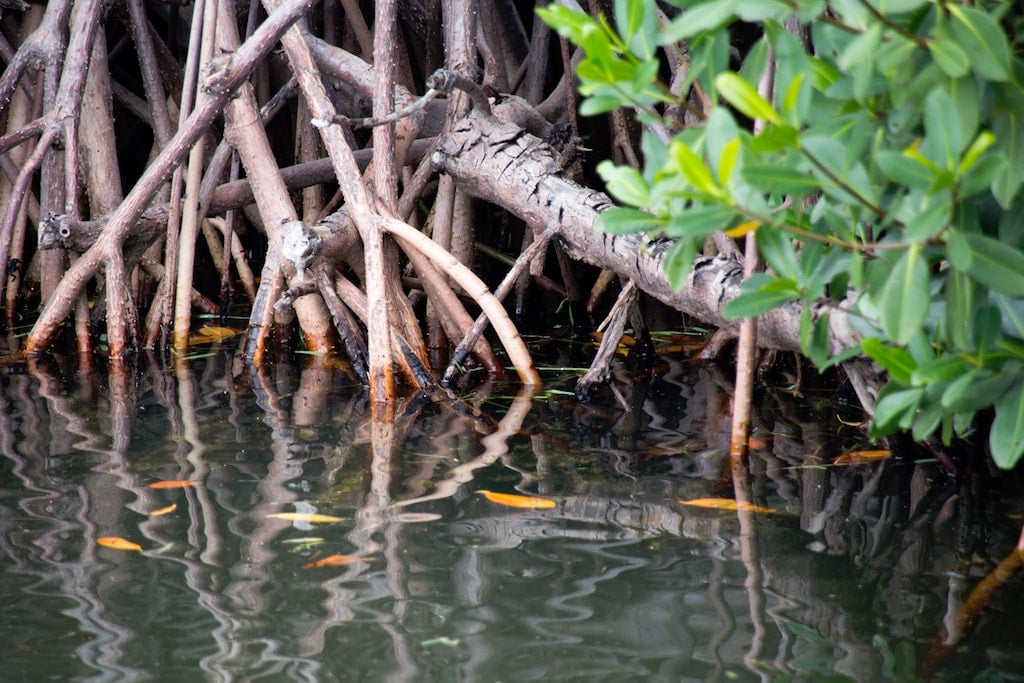 Mangroves are an essential part of Florida’s natural environment.

According to the Florida Department of Environmental Protection, Florida has an estimated 469,000 acres of mangrove forests throughout the state. This is a very good thing because mangroves are essential to Florida’s environmental health, and to the survival of the state.

Where are mangroves located in Florida?

Mangroves are found all over Florida’s coastlines. Mangrove forests live in all of Florida’s coastal counties, from the southernmost points of the Florida Keys up to Amelia Island and Florida’s northern border with Georgia.

Mangroves are the only type of tree which can live in saltwater because they obtain freshwater from saltwater.

Depending on the type of mangrove, saltwater is handled in one of two ways. Salt is either filtered before it enters a mangrove root structure, or it is absorbed and then later exuded through the mangroves’ leaves.

Why are Mangroves Important to Florida?

Florida’s mangrove ecosystems are essential for Florida’s natural environment. They serve a variety of functions and help ensure the survival of countless species and fragile ecosystems.

Healthy mangrove forests literally help protect Florida and make it possible to live in Florida. They protect our state in a variety of ways.

Mangrove roots help trap and absorb nutrients like nitrogen, phosphorus and others which pollute water bodies and contribute to some of Florida’s worst environmental disasters.

Mangroves also serve as a home for countless organisms which help filter water, such as oysters, barnacles, sponges, clams and other filter-feeders which naturally improve water quality.

On a long-term basis, mangroves are also essential for Florida’s survival because they help capture carbon from Earth’s atmosphere which slows climate change.

As climate change causes sea levels to rise, mangrove will be even more essential to Florida’s safety. Tragically, more than half of the world’s mangrove forests have been destroyed.

Mangroves are important because they help protect many of Florida’s native animals, especially fish and birds.

Important fisheries rely on mangroves to help sustain healthy populations, including sport fish and bluewater species which begin their life journeys in protected mangrove forests, before migrating into open waters.

Many adult fish species are commonly found within mangrove forest habitats, including:

Mangroves help sustain Florida’s bird populations because they provide shelter for roosting, nesting and sensitive rookeries. Some of Florida’s most rare bird species depend on mangroves, including the Roseate Spoonbill

Do alligators live in Florida’s mangroves?

Yes! American alligators can be found in low-salinity mangrove habitats all throughout Florida, along with snakes and many other reptiles and amphibians. American crocodiles also live in Florida’s mangrove forests. Florida’s crocodiles are rare, and only live in specific coastal habitats in south Florida.

How to Identify Types of Mangroves in Florida

Three species of mangroves are native to Florida:

Red mangroves (Rhizophora Mangle) are the most abundant mangroves in Florida and are the most commonly found. Red mangroves are sometimes called “Walking trees” because their raised root structures give the appearance of walking over the water. Red Mangroves are usually found in the lowest-lying land and closest to the ground compared to other types of mangroves.

Red mangrove leaves are broad and end in a point. Children in Florida are often taught to remember the shape of Red Mangrove leaves with a rhyming mnemonic device, “Red, red, pointy head”. Red mangroves also have long, droopy seeds which hang from their branches. These are called “Propagules”, and are how red mangroves spread.

Black mangroves (Avicennia Germinans) are usually found on higher ground and at higher elevations, relative to red mangroves. Said another way, they are found further away from the waterline.

Black mangroves can be identified because of the vertical protrusions, called “Pneumatophores” which rise out of the soil. They sort of resemble fingers sticking out of the ground, vertical pencils, or snorkels. The Pneumatophores act as snorkels and help the trees breathe during flooding and high tides.

Black mangroves can be identified by the presence of salt crystals on the back of their leaves. A rhyme is helpful to remember this characteristic — “Black, black, salty back”.

White mangroves (Laguncularia Racemosa) are found in the highest elevations relative to other mangrove species in Florida, and furthest from the waterline.

White mangroves do not have visible root structures. White mangroves also have distinctive leaves which set them apart from other species. The leaves of white mangroves are broad, have a light yellow-green color and have an elliptical shape. They have two glands, nectaries, at the bottom of the leaf near the stem.

Mangroves have robust reproduction methods and highly adaptable abilities to spread. Mangroves are able to spread and reproduce via waterborne seed transportation and via in-situ reproduction, as seed sprouts fall to the ground and spread around an existing tree.

Mangroves are both incredibly resilient and incredibly fragile. They are extremely vulnerable to human destruction.

Huge portions of Florida’s mangrove habitats have been destroyed by “dredge and fill” construction methods which produce waterfront housing developments and canals.

Regulations were enacted in 1996 to protect mangroves with the Mangrove Trimming and Preservation Act. Sadly, by the time protection was given, many of Florida’s most vulnerable and essential mangrove habitat had already been destroyed.

Additional resources to learn about mangroves in Florida:

Florida-Guidebook is supported by our readers. As an Amazon Associate this site may earn from qualifying purchases.