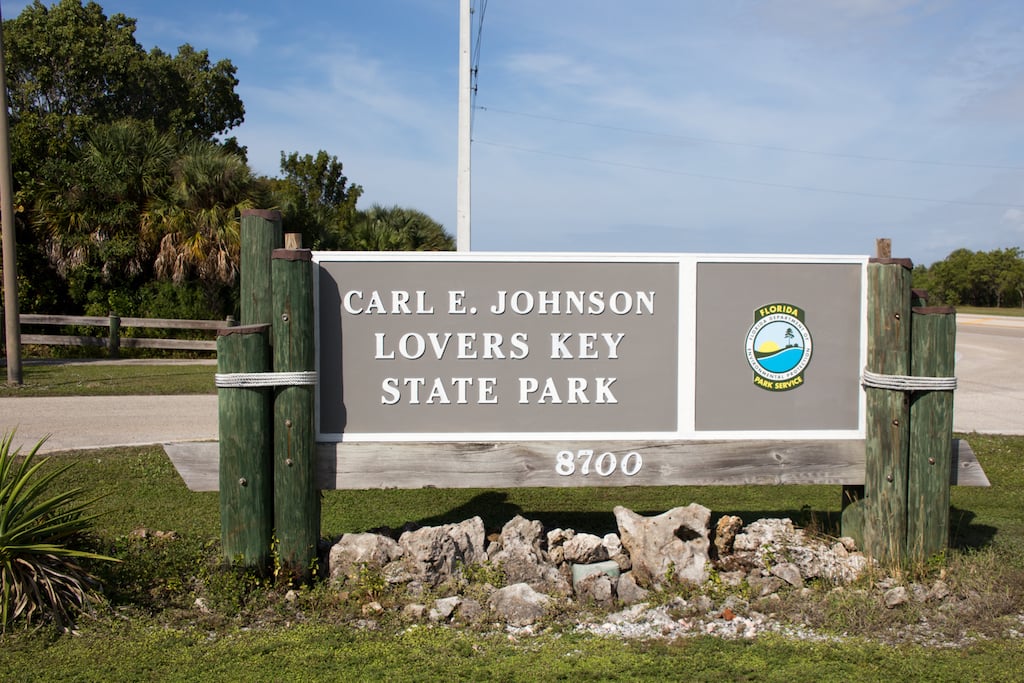 Lovers Key State Park is one of the best state parks in Florida. It is very popular because it is located near several medium-sized cities in Florida; Naples, Fort Myers and Cape Coral.

Lovers Key State park is one of the most highly visited state parks in Florida, and attracts millions of visitors per year.

It offers a glimpse into what Old Florida was like before it became urbanized and over-developed.

Lovers Key is also a special place because these beautiful islands were almost destroyed by real estate developers.

The islands were all set to be developed and ruined. The natural ecosystems were bulldozed and wetland were dredged to create residential canals.

Thankfully the islands were saved by protests and conservationists. They are now protected and preserved for public use, and for future generations.

Lovers Key State Park is open 365 days a year from 8AM until sunset.

There is an admission fee to enter Lovers Key State Park. The cost is the same as most state parks in Florida.

One of the best parts of Lovers Key State Park is that there is a large amount of parking, unlike some other beaches in Florida which are severely limited by parking capacity. There is also an overflow parking lot nearby for additional parking during extremely busy times.

The parking area is served by a free tram shuttle which shuttles visitors from the parking lot to the beach area. The tram stops running at 5 PM.

The walk from the parking lot to the beach takes approximately 10 minutes to walk. There are also boardwalks to access middle-sections of the beach.

Lovers Key State Park got its name because it used to be a popular date location for young couples to watch the sunset over the Gulf of Mexico. At that time the keys were only accessible via boat and were very private and secluded.

The land around Lovers Key State Park was almost ruined and destroyed by real estate developers in the 1960s.

The island was bulldozed and all of the native vegetation was cleared and dredged in preparation for real estate construction.

Thankfully public protests stopped the project and the park was protected as part of the Carl E. Johnson State Park, as it was called at the time.

There is a fascinating educational “Discovery Center” with exhibits on the local environment, wildlife and ecosystems.

One of the most popular exhibits is the Mangrove exhibit which shows the importance of Florida’s mangrove habitat.

The center is beautiful, modern and showcases the beautiful natural environment.

The facility is also available for events, including meetings, conferences and weddings, among others. There is a lovely covered porch which overlooks a mangrove habitat.

Favorite wildlife encounters include a variety of exciting marine life:

The state park is part of the Great Calusa Blueway, and also overlaps with a portion of Estero Bay, which was one of Florida’s first aquatic preserves.

Lovers Key State Park is an important part of the Florida Birding Trail. The park contains tidal creeks, lagoons, mud flats, mangrove swamps and tropical hammock which all provide sanctuary for a wide variety of birds. Wading birds are often seen foraging in the tidal zones during low tide.

There are land animals in the state park as well, including marsh rabbits, gopher tortoises and many others.

Visitors should be aware that alligators are present in some parts of Lovers Key State Park and take appropriate precautions.

Lovers Key does not have any on-site camping inside the state park.

Dogs are allowed in some parts of Lovers Key State Park, but are prohibited in others. Where they are allowed, dogs must be kept on a leash at all times.

Although dogs are not allowed on the beach in Lovers Key State Park, they are allowed in the excellent Bonita Beach Dog Park, which is one of the best dog beaches in Florida.

Lovers Key State Park is a popular destination for fishing. The area is excellent for fishing because it offers a wide variety of marine environments and many juvenile fishery habitats.

The nearby New Pass is a famously good fishing spot.

There is a boat ramp and kayak/canoe launch area.

Shark fishing from the beaches of Lovers Key used to be popular but it is no longer allowed during daylight hours. It is allowed with a special after-hours fishing permit.

Lovers Key State Park is one of the best places to kayak in Florida.

There are more than 2.5 miles of paddling trails inside Lovers Key State Park. Most of the kayaking is inside a protected mangrove estuary environment, although there are also options for open-water kayaking.

Kayaks, canoes and other equipment can be rented on-site.

There are many things to do in Lovers Key State Park.

The beaches are the most popular attractions, but there are many ways to enjoy the park, including:

There are more than 7 miles of hiking, biking and walking pathways through Lovers Key State Park.

The Eagle Trail follows along the shorelines of inner waterways on Black Island. Both the Black Island Trail and Eagle Trails are mostly grass and hard-packed dirt.

Some areas may have mud during wet periods, and there may be some sandy sections. Alligators can sometimes be seen sunning on the banks.

Overall there are more than 7 miles of trails inside Lovers Key State Park, including the beach front and a path which runs along the main road.

Lovers Key State Park has some of the most beautiful beaches in Florida.

The beach is more than 2.5 miles long and has beautiful, clean white sand.

The northern end of the beach tends to be less crowded than the southern end, which is closer to the parking lot and tram drop-off point.

The middle sections of the beach can be accessed via boardwalks which traverse over dunes and mangroves.

There are nice amenities on the beach, including a large covered pavilion and public restrooms.