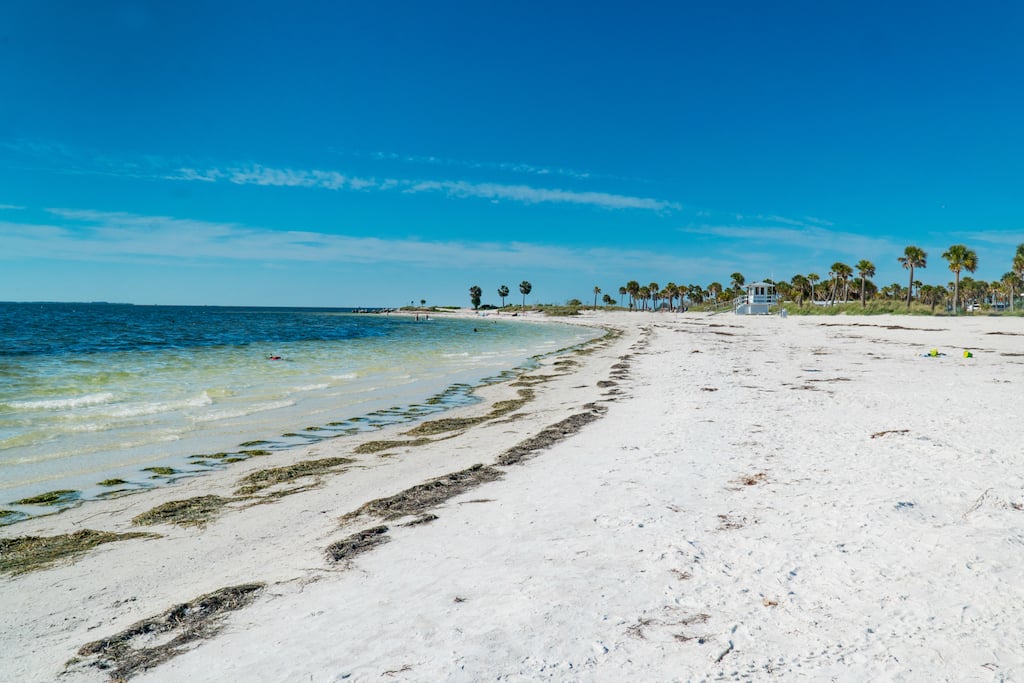 Tarpon Springs is famous for its historic sponge docks and Greek culture. But, the beaches in Tarpon Springs are also very nice, and are worth visiting!

In fact, Tarpon Springs’ beach at Fred Howard Park is the northernmost beach in Pinellas County’s mainland. It marks the first of many beautiful beaches along Florida’s central Gulf of Mexico coastline.

Some of Tarpon Springs’ other beaches, especially those located on offshore islands, are among the nicest beaches in Florida.

Here are our favorite picks for the best beaches in Tarpon Springs.

Note: The beaches in and around Tarpon Springs are different than other beaches on Florida’s gulf coast:

Some of these beaches are not as beautiful as the famous beaches of Clearwater, St. Petersburg, Anna Maria, or other beaches further south along Florida’s Gulf Coast.

They are still nice and can be fun to visit, but visitors (especially out-of-towners) are advised to do their research before visiting, and to have realistic expectations!

The most popular beach in Tarpon Springs is Fred Howard Park Beach.

Fred Howard Beach is a beautiful waterfront park and one of only two beaches in Tarpon Springs itself which doesn’t require a boat to access.

Fred Howard Park is located on the Gulf of Mexico coastline, approximately 3.5 miles west of the sponge docks.

The beach at Fred Howard Park is located on an offshore section of the park. It’s connected to the mainland via a one-mile long causeway which extends into the Gulf of Mexico.

The beach is relatively small compared to other beaches in Florida. But, it’s still a nice beach, and is the best beach in Tarpon Springs which doesn’t require a boat to visit.

The water at Fred Howard Beach is generally clear and calm because it’s protected by a series of offshore sandbars and islands which block wind and waves, especially Anclote Key.

Fred Howard Park has a large parking lot, which is conveniently located just behind the beach. Parking is approximately $5 and is good for all-day parking at the time of this writing.

There is sand at Fred Howard Park Beach; it is generally very fine and light, and is often hard-packed. The water’s natural sandy bottom is more of a silty, organic composition than traditional coarse beach sand, as most people might expect.

The water is generally clear and swimmers can wade up to about waist-height before the bottom turns into seagrass beds.

Many beach visitors complain about the seagrass, although the seagrass is extremely important and helps maintain the water’s clarity, environmental health and cleanliness.

Seagrass and seaweed can often accumulate on the beach, which can be smelly as the natural material decomposes.

Some parts of the beach are obstructed by large rock seawalls. These areas are often popular with fishermen because fish like to hide in the obstructions.

Fred Howard Park maintained by the City of Tarpon Springs and has nice facilities, including:

Note: Depending on the season and wind conditions the beach areas can be filled with insects, including biting gnats and noseeums. Bug spray is advised!

Sunset Beach is the second-most popular mainland beach in Tarpon Springs, after the beach at Fred Howard Park.

Sunset Beach is quite a bit smaller than the beach at Fred Howard Park, and is usually much less crowded.

Most locals advise that Sunset Beach is not a great swimming beach. Some visitors warn that the water can be stagnant and can sometimes be smelly.

Still, Sunset Beach is good for other activities like relaxing near the water, kayaking and playing sand volleyball.

Sunset Beach is also a popular launching spot for kite surfers and wind surfers due to the calm, flat and protected waters.

And, of course, watching the sunset over the Gulf of Mexico, as the name “Sunset Beach” suggests.

Locals say that the sunsets over the Gulf of Mexico are truly beautiful because of their completely unobstructed Gulf of Mexico views, and that the colors are always unique.

Sunset Beach covers approximately 11.3 acres and features a variety of amenities, including:

Sunset Beach also hosts a regular monthly concert series which is one of the most popular events in Tarpon Springs.

Note: Depending on the season and wind conditions the beach areas can be filled with insects, including biting gnats and noseeums. Bug spray is advised!

The most beautiful beaches in Tarpon Springs are located on a series of islands and sandbars called the Anclote Keys.

Beaches in the Anclote Keys are only accessible via boat or ferry service.

The Anclote Keys are located approximately three miles west of the Florida mainland, offshore from Tarpon Springs and the mouth of the Anclote River.

The Anclote Keys are some of the most beautiful islands in Florida, and are almost completely natural and undeveloped.

The chain of islands and sandbars contain some of the best beaches in the Gulf of Mexico. The Anclote Keys contain:

Anclote Key, the largest island, is the home of the Anclote Key Preserve State Park and the historic Anclote Lighthouse.

The beaches on Anclote Key Preserve State Park are the best beaches in Tarpon Springs, but they require a boat for access. The sand, water and beaches are clean, clear, and uncrowded.

Anclote Key Preserve also has some of the best beaches for seashell hunting in Florida. The shelling is excellent due to the offshore wind and tide conditions, and a relatively low number of beach visitors and seashell hunters.

Anclote Key Preserve State Park is located less than three miles west of Tarpon Springs, when measured from the mouth of the Anclote River.

In addition to other local sandbars, the beaches on Anclote Key are where Tarpon Springs locals come when they go to the beach.

Tarpon Springs’ local residents can often be seen boating in the local waterways of Tarpon Springs as they go to and from the beaches on Anclote Key Preserve State Park.

The beaches on Anclote Key are pristine, undeveloped, and are usually uncrowded.

The only downside to the beaches on Anclote Key is also the best part – access is only possible via boat, and there is no infrastructure.

Camping is allowed on Anclote Key Preserve State Park. There are no amenities or conveniences on the island, and rules and restrictions apply.

There is a beautiful lighthouse on Anclote Key which was built in 1887.

Like its neighboring lighthouses in Egmont Key, Sanibel Island and other Gulf lighthouses, the Anclote Key lighthouse was an important navigational beacon in Florida’s early history.

The Anclote River Park is not located in Tarpon Springs itself, but is located nearby in Holiday, within a short driving distance of Tarpon Springs.

Anclote River Park is one of the best beaches near Tarpon Springs.

Depending on where you’re driving from it might be a nice, convenient addition to a visit to Tarpon Springs.

The Anclote River Park offers nice, sandy beaches which are popular among local residents. There are also other amenities in the well-maintained park.

Although not directly in Tarpon Springs, the beaches at Honeymoon Island State Park are still within reasonable driving distance, and are among the most beautiful beaches in Florida.

The beaches in Honeymoon Island are extremely large and have beautiful, fine white sand, although some areas are narrow and some spots are filled with rocks.

The beaches in Honeymoon Island are extremely diverse. Some spots are routinely crowded, and some areas of the barrier island are almost always deserted.

Honeymoon Island has one of Florida’s best dog beaches near Hurricane Pass, which separates the island from its neighbor, Caladesi Island.

Honeymoon Island State Park is also the departure point for the ferry to Caladesi Island, which has more of the region’s most beautiful beaches.

Like Honeymoon Island, the beaches at Caladesi Island are located within a reasonable driving distance of Tarpon Springs, depending on the travel direction.

Except for minimal state park infrastructure, the beaches at Caladesi Island are pristine and undeveloped, much like the beaches on Anclote Key Preserve State Park.

The sand on Caladesi Island is beautiful, clean, white and fine. Seashells are abundant, and shelling is excellent, although not as good as on Anclote Key due to the higher number of state park visitors on Caladesi Island.

Note: Caladesi Island cannot be reached by car; it is only reachable by passenger ferry or private boat.

Caladesi Island can be reached by foot if walking northbound along the beach from Clearwater Beach.

The walk from Clearwater Beach to Caladesi Island is extremely long and can be extremely difficult because of the distance, heat and terrain.

Visitors who choose to walk are advised to use extreme caution.

Note: The Robert K Rees Memorial Park Beach (Green Key) is not actually in Tarpon Springs. But, it’s a very popular regional beach near Tarpon Springs, so we include it for consideration.

Although it is not located directly in Tarpon Springs, Green Key Beach is a convenient beach for visitors who come to Tarpon Springs from the north.

The beach is located approximately 10 miles north of Tarpon Springs, less than a 30-minute drive.

The beach at Robert K Rees Memorial Park is very similar to the beach on Fred Howard Park. The park and beach is a community park, administered by Pasco County.

The beach is small with a natural, silty organic shoreline. The park is located on a small island and connected to the mainland via a causeway.

Birds and wildlife can often be seen in the park and along the beach and wetlands, including dolphins, wading birds, and many forms of estuary and marine life.

The park has beautiful views of the Gulf of Mexico and sunsets.

One downside to the beach at Robert K Rees Memorial Park is that large amounts of seaweed and seagrass often accumulate on the shores, along with algae at times. The decomposing vegetation can be smelly and overwhelming when present.

The beaches near Tarpon Springs offer an incredible variety, including world-class pristine beach wilderness if you have access to a boat, or are willing to arrange a boat ride!