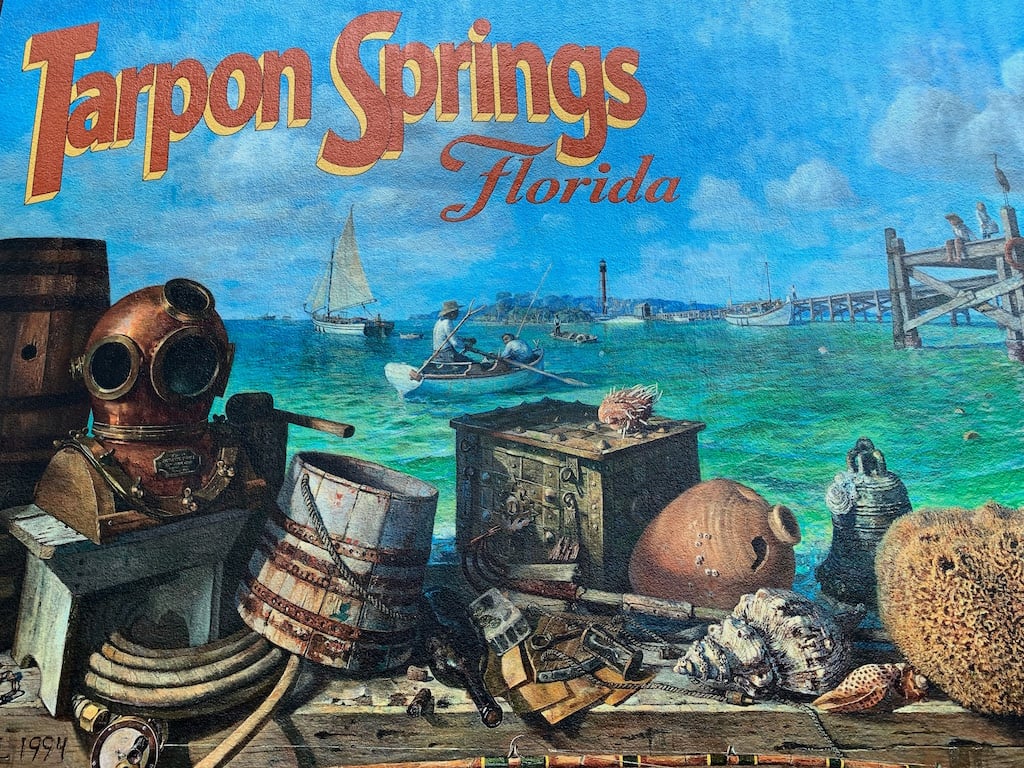 Tarpon Springs has more than 51 miles of waterfront, mostly consisting of waterfront riverfront for the Anclote River, bayous and protected inland waterways.

The town was once known as the “Venice of the South” because of its large network of waterways and lovely quality of life.

Tarpon Springs is a very unique place culturally. The town has one of the strongest influences of Greek culture anywhere in the United States, and is very proud of its Mediterranean heritage.

Because of its convenient location, Tarpon Springs is a popular day trip from Tampa and St. Petersburg.

Is Tarpon Springs Worth Visiting

Tarpon Springs is definitely worth visiting! It is a very neat town to visit for anyone who is interested in history, Florida’s nature, beautiful waterways or Greek culture.

Tarpon Springs has an element of real authenticity because there are real people with real Greek culture which revolves around the water. It’s common to hear locals speaking Greek to each other, and Greek culture really lives in Tarpon Springs.

For example, during our last visit we overheard a group of men chatting about one of their recent trips “back home” to an island in Greece.

Through strong Greek accents we heard that they were chatting about how things were going, and whether family gifts had been received, etc.

Tarpon Springs is worth visiting year-round, but in my opinion it is best to visit during Florida’s mild shoulder season months of spring and fall from April-May and from October-December.

The next best time to visit Tarpon Springs would be during central Florida’s relatively mild winters, especially on a warm winter day.

For example, visitors who want to swim at local beaches, or maybe take a dolphin tour boat might want to visit during warmer weather.

During the winter manatees tend to gather in predictable locations as they depend on warm water for survival.

The surrounding region, the “Nature Coast” offers some of Florida’s best chances to see manatees in the wild, kayak with manatees, and even swim with manatees*

*Visitors should know that swimming with manatees is highly controversial and is considered dangerous and unethical by many experts.

Note: It is illegal to harass, crowd or touch a manatee. These behaviors also lead to manatee deaths because it alters their natural behavior. Manatees may be scared away from warm-water survival locations, or trained to approach boats, which leads to them being run over by boats or sliced by propellers.

Anclote Key Preserve and State Park is one of the best places to find seashells in Florida. Winter days are said to be the best for finding shells because there are fewer crowds to scour the beaches.

It’s also recommended to hunt for shells after strong storms because the strong wave action helps uncover and dislodge shells, bringing them to the sand’s surface.

Depending on your preference and desired activities, the worst time to visit Tarpon Springs might be during central Florida’s hot and humid summer months.

During the summer the heat index is often higher than 100 degrees fahrenheit due to the region’s intense humidity, even when high temperatures are “only” in the low nineties.

There is very limited shade in the sponge dock district so it can become extremely hot.

Visitors who come to Tarpon Springs during summer months should also be prepared for almost daily afternoon thunderstorms, which bring intense rainfall, wind, lightning and thunder.

Does Tarpon Springs Have A Nice Beach?

There are several beautiful beaches near Tarpon Springs. Some are accessible from the mainland while others are only accessible via boat.

In general, this stretch of the Gulf of Mexico coastline is filled with shallow waterways and bayous, rather than white sandy beaches like those found further south in Clearwater and further south along the gulf coast.

There are two main local beaches near Tarpon Springs which are accessible from the mainland; Sunset Beach and Fred Howard Beach.

The most popular beach near Tarpon Springs is Fred Howard Beach, located offshore of Fred Howard Park, connected via a one-mile long causeway which extends into the Gulf of Mexico.

The beach at Fred Howard Park is relatively small compared to other beaches in Florida because it’s located on a small island at the end of a causeway. But, it’s still a nice beach.

The water is generally clear and calm, partly thanks to an offshore sandbar and island, Anclote Key Preserve State Park, which provides protection for the beach at Fred Howard Park.

There is a large amount of parking in the parking lot, which is conveniently located just behind the beach. Parking is approximately $5 and is good for all-day parking at the time of this writing.

The sand at Fred Howard Park Beach is generally very fine and light, and is often hard-packed. The water is sandy and the water is clear up to about waist-height before turning into seagrass beds, which help contribute to the water’s clarity, health and cleanliness.

Seaweed can often accumulate on the beach, which can be smelly.

Some parts of the beach are obstructed by large rock seawalls; these areas are often popular with fishermen because fish like to hide in the obstructions.

Sunset Beach covers approximately 11.3 acres and features a variety of amenities, including a boat launch, picnic tables, grills, a volleyball court, a children’s playground and restrooms.

Most visitors describe Sunset Beach as a modest beach which is good for spending time near the water, but not as a great place for swimming or a traditional “beach” experience. Some visitors describe the water as stagnant and stinky.

The Anclote River Park, another popular beach in the area around Tarpon Springs, accessible from the mainland.

Other Beaches Near Tarpon Springs

There are also a number of offshore sandbars near Tarpon Springs, including those at Three Rooker Island, Honeymoon Island, Anclote Key Preserve State Park, and more.

Read more about beaches in Tarpon Springs and nearby

Parking can be especially difficult to find during peak tourist season. Visitors should pay attention to parking regulations to avoid being towed or parking tickets.

There is essentially no parking directly in the Sponge Docks district or on the narrow street of the main street, Dodecanese Boulevard. There are several lots one street back from the main waterfront.

Some restaurants offer free parking for restaurant patrons, but visitors should pay attention to rules like potential time limits.

There is a large parking lot near Rusty Bellies seafood restaurant which offers free parking for guests who eat there.

The lot is often monitored to ensure that parking is for Rusty Bellie guests only.

Other restaurants offer parking for approximately $5 for all-day parking.

There are two downtown areas in Tarpon Springs; the famous Historic Sponge Docks, and the original “Downtown” area of the City of Tarpon Springs.

The downtown district features some brick streets, historic Victorian-style homes and a number of historic streets.

Most businesses in the downtown district consist of boutiques, shops, art galleries and service businesses.

Downtown Tarpon Springs has a number of lovely public spaces, including Craig Park, which is filled with beautiful live oak trees draped in Spanish moss.

Craig Park sits along a beautiful, peaceful bayou waterfront and its neighborhoods are filled with charming historic mansions.

Much of Tarpon Springs is situated around the water, especially peaceful bayous which provide protected, sheltered water access.

The protected bayous were important features which helped provide safe anchorages and shelter the sponge fishing fleet from storms, and helped shape the town’s geography and cultural identity.

Downtown Tarpon Springs is listed in the National Register of Historic Places.

The Tarpon Springs Sponge Docks are both a tourist hotspot and an active working waterfront.

Commercial boats of various types, including sponge boats, shrimping trawlers and fishing boats, can still be seen in the waterways and in drydocks throughout the Anclote River and connecting bayous.

Additional streets with Greek names radiate off of Dodecanese Boulevard and feature even more boutiques, galleries, restaurants and shops.

The sponge docks tend to be much more “touristy” than downtown Tarpon Springs, and have a much heavier Greek influence.

Although the sponge docks could be viewed as a “tourist trap”, they also carry an air of real authenticity.

The town’s residents truly are Greek, and the town’s historic waterfront was truly a focal point and reason for the town’s existence.

Along with downtown Tarpon Springs, the sponge docks and surrounding streets were formerly a thriving center of commerce in the 1800s, when Greek immigrants first began settling in Tarpon Springs.

Tarpon Springs was one of Florida’s main waterfront cities, along with others like Cedar Key, Key West and other cities with important maritime heritage.

Florida’s maritime culture was especially important before the age of railroad and highway, when marine transportation was the best, and often only, way to travel around Florida.

More than 20,000 Greek-Americans live in Tarpon Springs, giving it one of the highest concentrations of Greek residents in the United States.

Residents in Tarpon Springs can often be heard speaking Greek to one another, and Greek food is a staple in the small community for both locals and visitors.

Dive for the Cross

As part of the ritual young men aged 16-18 dive into the cold water of Craig Park to find a cross, which is thrown into the water.

The traditional Epiphany celebration is meant to commemorate Jesus’ baptism in the River Jordan, performed by John the Baptist.

Tarpon Springs has a deep and interesting history. Historical elements of the town date back to several periods on Florida’s past:

Tarpon Springs is the oldest town in Pinellas County, and was incorporated in 1887.

Many buildings and streets feature elements of Floridian architecture, combined with Greek, Mediterreanean and Victorian characteristics.

Tarpon Springs has been inhabited since the Spanish first arrived in the early 1500s, and long before that by Native Americans who lived in the area for many thousands of years.

The town reached its prime in the late 1800s and early 1900s when massive fields of sea sponges were discovered offshore, igniting a boom-time for the small seaside town. At the time naturally-harvested sponges were the only form of sponge available, before synthetic sponges were invented and manufactured.

Following the discovery of sponges hundreds of traditional Greek sponge divers immigrated to Tarpon Springs from Greek islands. The Greek spongers brought new technology with them, including diving helmets and diving equipment, which revolutionized the sponge diving industry in Florida.

Is Tarpon Springs a good place to live?

Tarpon Springs is a nice place to live, although it does have some downsides in addition to many lovely characteristics.

One of the best things about living in Tarpon Springs is its location.

Tarpon Springs sits in Florida’s Nature Coast, and is also close to some of Florida’s largest cities, including Tampa, St. Petersburg and Orlando, among others.

Tarpon Springs also offers a close-knit community group. On the downside Tarpon Springs is a small town with potentially limited economic opportunities, outside of tourism.

Residents of Tarpon Springs usually mention that the weather is very good, although winters can be chilly and summers are always brutally hot and humid.

Tarpon Springs is a lovely small town in Florida. It is conveniently located near Tampa, St. Petersburg, Orlando and other major cities in Florida, making it a convenient place to visit.

Tarpon Springs offers a lovely and unique mix of history, Greek culture and natural beauty. It is well worth a visit if you are in the area!