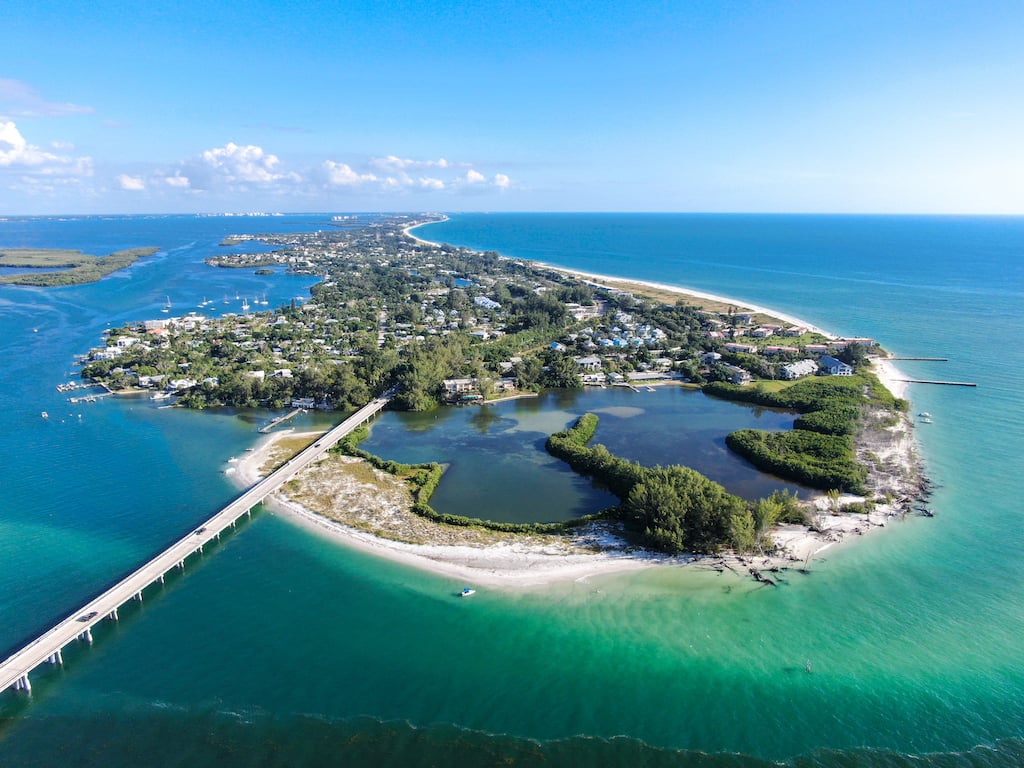 One “Beer Can Island” is located near Sarasota, on the northern tip of Longboat Key.

The history of this small island traces back for many decades. Historians say it was created in the 1930s as part of the Intracoastal Waterway dredging project, and has been a popular destination since at least the 1950s. Beer Can Island on Longboat Key is also known as Greer Island.

The other “Beer Can Island” is a small, privately-owned island in the middle of Tampa Bay. It is located approximately two miles away from Apollo Beach, and is just offshore from the TECO Manatee Viewing Center. The island is commonly known as “Beer Can Island”, but the owners changed the name to “Pine Key Tampa Bay” in 2021.

This article is about Beer Can Island, also known as Greer Island, near Sarasota and Longboat Key.

Beer Can Island, also known as Greer Island, is located at the northernmost point of Longboat Key. It is bordered by the waters of Longboat Pass, and sits at the south side of the Longboat Pass Bridge, which connects Longboat Key with Anna Maria Island.

Beer Can Island is essentially a one-mile stretch of sandy beach which wraps around the northern tip of Longboat Key.

Today Beer Can Island is not actually an island, but more of a peninsula. It was an island in the past, but shifting sand and beach erosion have connected it with the rest of Longboat Key.

The beach at Beer Can Island is absolutely beautiful. The water is generally clear, especially during periods of low wind and wave action.

Manatees can often be seen in the clear, shallow waters around Beer Can Island

The sand is beautiful and baby-powder white, just like the other famous beaches nearby, including Siesta Key, the beautiful Coquina Beach to the north and Whitney Beach to the south.

Most visitors agree that the beach at Beer Can Island is just as beautiful as all of the other nearby beaches, which are more famous, and are usually more crowded.

Beer Can Island offers a much more interesting and adventurous beach experience than other beaches in the area.

On uncrowded days it can be a great place to find beautiful shells and sand dollars.

Beer Can Island is a popular destination for birdwatchers and photographers.

Many Australian Pine trees have fallen over the years. As they age, the trees have weathered into a beautiful gray, and resemble driftwood. The trees, set against the beautiful blue water, offer dramatic photo opportunities.

Some driftwood was removed in 2021 as part of a large beach renourishment project, which was controversial in the local Longboat Key community.

History of Beer Can Island

Beer Can Island appears to have been created in 1939, during the dredging and construction of the Intracoastal Waterway.

The dredge material joined the two smaller islands, and altered the flow of water through Longboat Pass.

Beer Can Island and Longboat Key are both barrier islands, which change constantly from wave and tide erosion.

Before the island was created, the bay is said to have flushed itself out at every turn of the tide.

After the dredge fill altered the water flow, sand began accumulating, and Beer Can Island began to grow.

Over time sand accretions connected Beer Can Island with the rest of Longboat Key, and the island turned into more of a peninsula. The joining of the island also closed off a shallow lagoon, which is a popular place for shorebirds.

Throughout its history, Beer Can Island has been a popular beach spot.

Some sources mention that it was a popular beach hangout as far back as the 1950’s, before other beaches in the area were developed into county parks.

The name “Beer Can Island” has apparently been used since at least the 1950s, and possibly earlier.

Beer Can Island is subject to the jurisdiction of the Town of Longboat Key, and was apparently donated to Manatee County in the 1970s.

The name “Greer Island” honors a local couple, the Greers, who fought to save the island from development.

The name was never officially changed to Greer Island. Today the island is referred to as both Beer Can Island and Greer Island interchangeably.

Although this is less of an issue after the recent beach renourishment, high tides and strong wave action may block some beach access to Beer Can Island. Visitors should be extremely careful and should not attempt to access Beer Can Island if conditions are unsafe.

Visitors should also be aware of private property near the parking areas for Beer Can Island, and should ensure that they comply with parking rules.

Dogs and alcohol are prohibited on Beer Can Island.

Parking for Beer Can Island

Visitors to Beer Can Island should be careful to only park in public parking lots, and should avoid parking on any private property. Parking violations may result in fines, or their vehicle being towed.

There are two public parking areas which provide reasonable access to Beer Can Island.

The most convenient parking for Beer Can Island is a public parking area just south of Longboat Key Bridge.

Parallel parking is available along N. Shore Drive. Signs indicate that parking is restricted from 11 PM until 5 AM.

A third parking option for Beer Can Island is to park at the Coquina Beach parking lot on Anna Maria Island, and then walk south across the Longboat Key bridge.

Many people like to visit Beer Can Island via boat. Especially on summer weekends, many boats come to anchor off of Beer Can Island. There are not any docking facilities, so boaters should be prepared to anchor safely and have the proper knowledge and equipment.

Things To Know Before Visiting Beer Can Island

Beer Can Island is a favorite beach spot for many locals, but there are some downsides.

During certain times parallel parking may be restricted, so be sure to pay attention.

Be sure to only park in a properly designated place. Be sure to follow local signage and to parallel park appropriately.

In general, Beer Can Island is an excellent beach for exploring, but there are better nearby beaches for laying out and sunbathing. The beach is not very wide, and many parts have stumps buried in the sand.

Beer Can Island is usually not very crowded during the week, but can become very crowded on weekends and holidays.

Beer Can Island is a great place to visit. It is beautiful, and is very unique compared to other nearby beaches.

It’s not for everybody, but it is a great place to explore and find a nice, relaxing stretch of beach, if you avoid going during the busiest times. It’s also a great place to visit by boat, for an even more adventurous experience!

If you do visit, I hope you enjoy it! Please help take care of Beer Can Island, AKA Greer Island. If you visit, especially with a group, please help leave it cleaner and more pristine than you find it, it’s a special place!