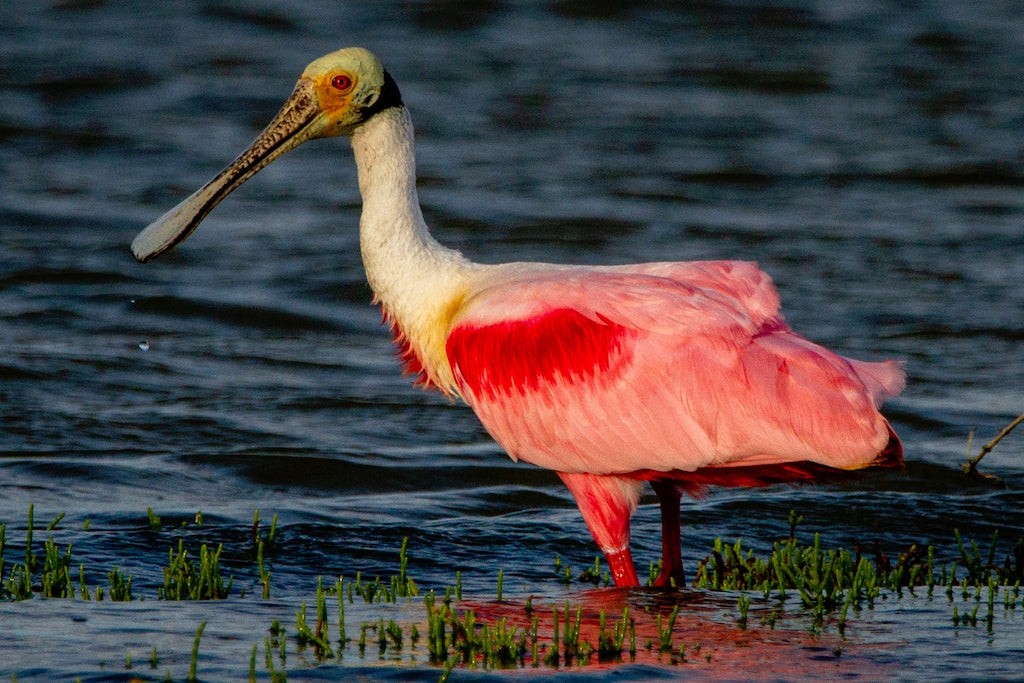 Roseate Spoonbills (Ajaia ajaja) are one of the most beloved birds in Florida, and are an iconic symbol of Florida Bay!

Birders and researchers from around the world visit Florida for the chance to see Roseate Spoonbills.

Roseate Spoonbills are members of the Ibis family. They hunt, forage and socialize together and often live in colonies of 100 pairs of birds.

Adult Roseate Spoonbills have bright red/pink shoulders. Their underwings are also pink. They are often mistakenly identified as flamingos because of their pink coloration. Juveniles are also pink but their coloration is less vibrant.

Roseate Spoonbills were almost hunted to extinction in the past. Along with other birds of Florida, spoonbills were hunted for their feathers, or plumage, which were used in women’s hats, fans and other fashions.

The birds were only saved from extinction thanks to the Audubon Society, which pressured states to stop the plumage trade in the years around 1910.

The protective laws helped reduce demand for the feathers, which helped bird populations recover. At the worst of the crisis there were only about 100 surviving pairs of spoonbills in the United States. As late as 1930 there were only 500 nesting pairs observed.

Today Roseate Spoonbills in Florida are designated as a “Species of Special Concern.”

Roseate Spoonbills are found along the coastlines of South Florida, from the southern islands of the Florida Keys, Florida Bay and Everglades, and as far north as Tampa.

Roseate Spoonbills are found in Florida Bay from November until March, especially the islands of Sandy Key, Tern Key and Joe Key, among other islands.

Roseate Spoonbills are also found throughout the coastal Gulf of Mexico region, as far east as Texas and northeast Mexico.

Spoonbills especially prefer islands because their nests are kept safe from predators, like racoons.

Roseate Spoonbills feed on many forms of wildlife found in Florida Bay and the Everglades:

They forage in shallow water, including fresh, brackish and saltwater environments. They are usually found in lagoons, wetlands, bays, mangrove forests and swamp forests.

Spoonbills dip their bills into shallow water and mud. Their bills are equipped with sensitive receptors which can detect prey. When they detect prey their bills snap shut suddenly.