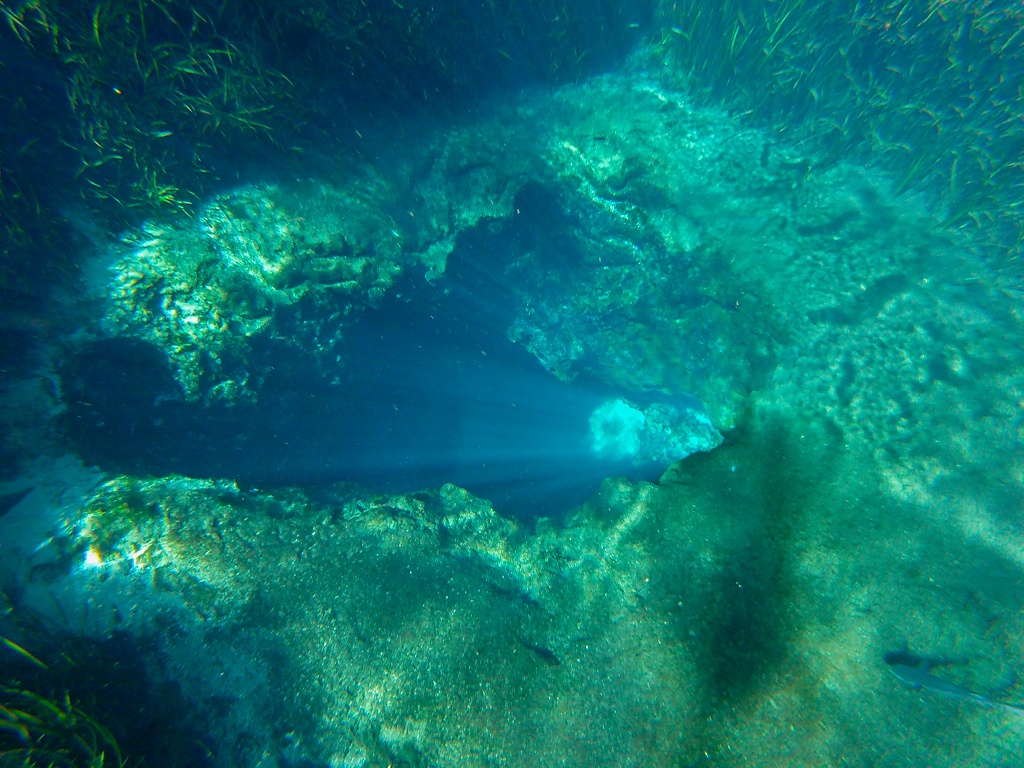 Springs in Florida and Karst Geology

Before talking about Florida springs, and the karst limestone that makes them possible, it’s helpful to know a bit about basic geology.

There are three main types of rocks:

While talking about Karst, we’ll focus on sedimentary rocks.

Sedimentary rock is made from materials like sand, pebbles, shells, and fossils, which come together to form a rock. Some, or all of this material, can be left-over organic material from plants and animals, like coral.

These materials accumulate over very long periods of time. They stack on top of each other to form layers. Over time the layers grow, and eventually become very heavy. The heavy layers are pressed downward on each other, and eventually they harden into rock.

Florida’s springs exist because of Karst limestone, which is a type of topography. It’s formed when certain types of sedimentary rocks are dissolved by acidic water.

The most common types of sedimentary rock that form Karst topography are limestone, gypsum and dolomite. Between 10 and 30% of the world rests on karst topography. It forms the earth’s bedrock in many areas.

Karst topography is sort of a natural magic trick: water dissolves solid rock. It requires a special set of conditions, and can leave behind amazing natural formations.

Some of the most beautiful, exotic landscapes on Earth have been formed by Karst geology.

Rain falls from the sky. Everyone knows that. But, what happens to rain after it hits the ground? It becomes ground water.

Lots of things can happen to groundwater:

Karst topography has lots of cracks.

The vertical cracks are called joints, and the horizontal ones are called bedding planes. Both types of cracks allow water to collect, and flow through the rock. Sometimes these cracks grow into giant caves, which can be as big as a house. They can also form into fast-moving underground rivers which run for many miles under ground. Sometimes, the groundwater can enter a crack and stay trapped there for thousands of years.

Karst topography is soluble, which means that it can be dissolved.

One factor that contributes to the strength of carbonic acid is the amount of organic material in soil. Fertile, lush tropical environments (Like Florida!) provide a lot of plant and animal matter, which are all high in carbon. When rain flows through porous, carbon-rich soil, it creates higher concentrations of carbonic acid.

It’s no coincidence that some of most dramatic landscapes are in tropical SE Asia. In these areas, warm temperatures and lush vegetation create higher levels of carbon dioxide. The tropical climate provide ample rain water, which washes through the soil and creates large amounts of carbonic acid.

All of this carbonic acid eats away at the limestone and other soluble rocks, creating amazing Karst formations.

After finding its way underground, water can collect in cracks, and eventually turn into underground rivers. These are called subterranean rivers.

These rivers can take on all sorts of shapes, sizes and characteristics. The water can sit in one place and not move for 100 years, or it can travel several miles in only a few days; it all depends on the underground characteristics.

These subterranean rivers can create their own forces which act on the environment. Besides the the chemical effects of carbonic acid which dissolves rocks, fast-moving rivers erode rock.

Karst Environments around the world

Some of the most amazing, beautiful and sensitive landscapes on Earth are formed by Karst.

In Earth’s geologic past, when the Earth was warmer and sea levels were higher, Mexico’s Yucatan Peninsula was covered by ocean water.

This left the region with a karst landscape made of limestone. This, combined with Mexico’s heavy rainfall and lush tropical vegetation, creates an ideal environment for carbonic weathering and karst geology.

Thanks to this combination of factors, Mexico is home to an amazing series of sinkholes called Cenotes.

How does it work?

We tend to think of rocks as solid, hard objects which cannot be easily broken. You know, like the common phrase, “hard as a rock”, or “tough as a rock”.

Because of the way they’re made, some rocks have a weak-spot: water. Even if they feel strong and hard on the outside, they can be eaten away by water. In fact, one of the most beautiful places on Earth, the Grand Canyon, was formed by flowing water over millions of years. Even the biggest, strongest and hardest rock can be worn away by water.

In Karst topography the water not only erodes rock, but it can actually eat away, too. This only happens in certain types of rocks, but when it happens, the results can be amazing.

How can a rock hold water?

We usually think of rock as a solid piece of material. Sometimes that’s true, but it doesn’t always have to be. There are many types of rocks, and some have very different characteristics than what we’d usually expect.

What do you call a rock that doesn’t sink like a rock?

Pumice is one type of rock that doesn’t behave the way we’d expect it to. In fact, it can actually float in water.

Pumice is a volcanic rock. It’s formed by lava that cools very quickly, leaving lots of air bubbles behind. Some of the air bubbles are visible on the outside of the rock, but some of the bubbles are trapped inside. These little air pockets provide enough flotation that pumice rock floats on top of water.

The Florida Aquifer is a vast sheet of carbonic rock beneath the soil of Florida. Like the floating Pumice rock, this carbonic rock is not a solid piece of rock like we usually imagine. It varies by location, but much of this underground sheet of rock is filled with little cracks and gaps.

These can be as small as the head of a pin, or as big as a house. Many times, these spaces are filled with water that seeps down from the Earth’s surface.

Hydrogeology is a sub-field of geology which specializes in the study of groundwater. Many scientists in this field study subterranean water, or underground water.

Although water is a renewable resource, it is not infinite. It is highly vulnerable to over-use, contamination and many dangerous forms of abuse. That’s why groups like the Hydrogeology Consortium, and other scientists, are so passionate about protecting water, which is our most precious resource.

Water: Essential for Life on Earth

Many people around the world rely on underground aquifers for drinking water and survival.

It’s crucial for scientists, communities and individuals to understand the field of hydrogeology.

With a better understanding of science we can be better stewards of our environment and the natural resources we need to survive.

The Role of Hydrogeologists in Society

Our Hydrogeology Consortium is especially concerned with preserving sensitive Karst environments and our own natural treasures, Florida Springs.

Florida RV Camping Guide
Florida-Guidebook is supported by our readers. As an Amazon Associate this site may earn from qualifying purchases.