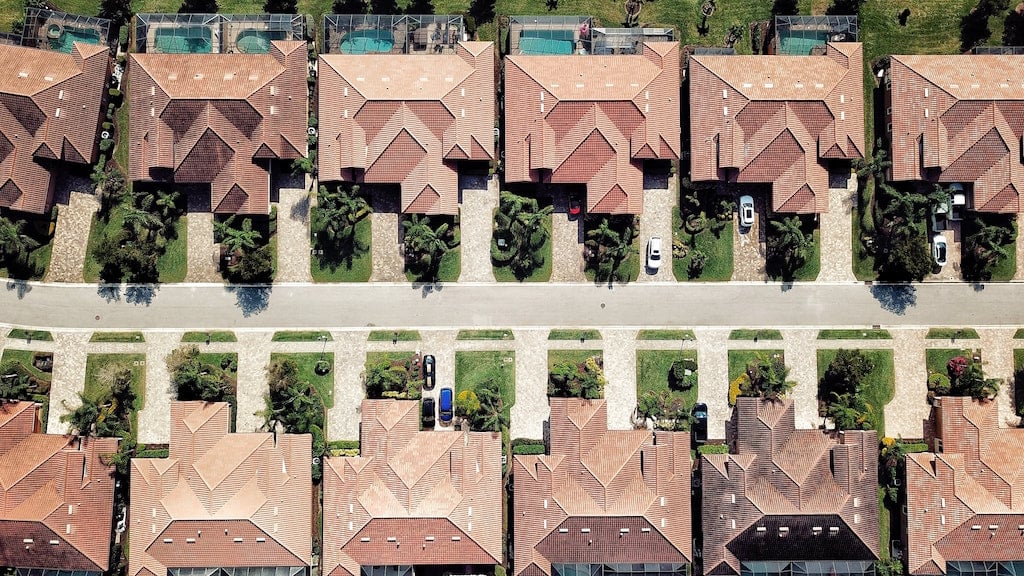 The Villages® is one of the largest retirement communities in Florida.

All combined The Villages cover more than 80 square miles, which is equivalent to more than 51,200 acres.

Amazingly, The Villages is still growing, and is one of the fastest growing cities in Florida.

Most people imagine The Villages as a single block of track housing, but it’s actually more of a collection of smaller neighborhoods.

There are approximately 78 smaller neighborhoods in The Villages at the time of this writing.

Each smaller sub-community has its own characteristics, and the size of each village varies. Some villages have as few as 100 homes, and some have more than 1,000.

Most smaller villages have their own swimming pools, amenity centers, recreation centers, golf courses, characteristics, and other nuances.

The Villages is located in a rural section of central Florida.

The Villages community is so large that it includes multiple zip codes and is located in three separate county jurisdictions:

Cities Near The Villages

The Villages is not located immediately near any major cities, but it is within convenient driving distance of several cities. The Villages is located near the following large cities:

The Villages is located just over one hour away from Disney and theme parks in Orlando, and Orlando International Airport (MCO)

The Villages is a major population center in an otherwise rural section of central Florida.

Beaches near The Villages

The Villages is located in the center of Florida so there are not any beaches near The Villages.

The closest beaches to The Villages are in Cedar Key, approximately 40 miles west of The Villages, on the shores of the Gulf of Mexico.

The beaches in Cedar Key are modest. They are not the beautiful, desirable “Florida beaches” that most people expect to find in Florida.

On the Atlantic side New Smyrna Beach is the closest beach to The Villages.

There are numerous natural springs near The Villages, along with many lakes and rivers.

Visiting and Touring The Villages

Many people are interested in moving to The Villages, but are unsure about whether they’ll like the community and lifestyle.

People considering moving to The Villages are encouraged to visit first to tour The Villages, before making a commitment.

The Villages official website describes a “Lifestyle Preview Program” which includes temporary visits of 4-7 days to experience life in The Villages. In this program visitors can be given access to a furnished house and a golf cart.

The nightly rates and availability vary, but are surprisingly affordable, ranging from about $100 to $200 at the time of this writing. The prices are highest during Florida’s winter “snowbird” season.

There are a number of private home rentals in The Villages, AirBnBs and other short term vacation rentals for shorter commitments.

Living in The Villages

Living in The Villages is a unique lifestyle. It combines many elements of care-free, youthful stages of life, along with a strong sense of community and practical accomodations for the aging process.

The Villages is one of the original golf cart communities in Florida; the entire community is designed for golf carts instead of traditional vehicles.

There are almost 100 miles of golf cart paths throughout The Villages. Residents can drive their golf carts almost anywhere within the community, and can even use their “daily driver” golf carts on the numerous golf courses.

Many residents say that the golf cart community aspect of The Villages gives the place a fun, youthful energy. Many say it is also extremely convenient, and prevents wear and tear on their main vehicles.

The golf cart community has other, practical advantages, as well.

One of the biggest perks of a golf cart community is that, especially with an entire community of elderly people, it can be much safer than having the roads filled with older drivers.

Still, crashes happen, and golf cart speeding is reportedly a problem. A surprising number of deaths have occurred from golf cart accidents.

Golf carts in The Villages are expressions of identity.

Although there are some plain “club cars” on the paths, many golf carts in The Villages are customized beyond belief, to reflect the personality of their owners.

Many golf carts in The Villages are customized to resemble classic cars, hotrods and even airplanes.

Because golf carts are such an important part of living in The Villages a cottage industry has sprung up to service the retiree’s needs.

Besides golf cart travel within the community, there are other forms of transportation in The Villages.

The Villages has a trolley-style bus tour which conducts tours around The Villages. Private shuttles and other transportation options also serve residents of The Villages for trips to Orlando, airports, and other needs.

There are many things to do in The Villages. Residents reportedly have a motto, “If you’re bored here, it’s no one’s fault but your own.”

The Villages offer hundreds of clubs and many thousands of recreational opportunities for residents.

Residents living in The Villages have formed more than 2,000 clubs and activities, which attract members according to their own interests.

Other popular activities and clubs include crafting, hiking, art; the list goes on. If a club does not exist, residents can create their own to find like-minded friends.

The Villages also offers live entertainment almost every day of the year, especially live music and dancing in the town centers.

Many residents in The Villages are surprisingly athletic!

There are clubs for running, cycling, dancing, archery, martial arts, fishing, sailing, and just about everything else one could imagine.

The Villages is also known for its obsession with pickleball, which is played on more than 100 courts throughout the community.

Tennis, shuffleboard, horseshoes and other outdoor activities are also popular.

Golf in The Villages

One of the biggest selling points of living in The Villages is that residents get “Free golf for life”. Not surprisingly, golf is one of the most popular things to do in The Villages.

There are more than 50 golf courses in The Villages, including 40 nine-hole “executive” golf courses which are free and open to all Villages residents.

There are also an additional 13 championship golf courses which require additional fees.

“Amenities” in The Villages are a popular topic for discussion for both residents and prospective residents. The amenities and activities are one of the top selling points for retirees.

Each village has its own amenity center with pools and other features. There are more than 100 in all.

People who live in The Villages are given access to an amenity “key card” pass which gives access to all of the amenity centers throughout The Villages.

There are three main “downtown” areas in The Villages:

Each town square has a cute small-town feel. They are well-kept with restaurants, bars, live music, shopping and other attractions. Some restaurants are locally owned, while others are part of national or regional chains.

Each “downtown” town square has its own theme and unique feel. Lake Sumpter is often described as the most popular town square because it is centrally located and has waterfront boardwalks around Lake Sumpter.

The cost of living in The Villages varies greatly depending on one’s lifestyle, housing choices and other factors.

There are unique costs of living in The Villages which may not be considerations in other communities.

On the other hand, other communities have their own expenses which are not factors in The Villages.

Residents in The Villages pay monthly “amenity center” fees which are less than $200 per month at the time of this writing.

Other monthly fees include trash collection, water, sewer, electric insurance, taxes. The cost of living will also depend on the price of home prices, or home rental prices, as applicable.

The Villages official website gives samples of monthly costs ranging from $807 at the low end to $1,262 at the high end for different housing options. Other fees may also be applicable, including internet, landscaping, pest control, maintenance and other costs of living.

People browsing homes for sale in The Villages should pay attention and educate themselves on the nuances of community development district (CDD) fees and assessments, including development bonds.

The Villages has several dedicated media outlets for their residents.

The Villages has an annual athletic competition, “The Villages Senior Games”, which is held every April. Every year thousands of residents compete in various sports, including:

The winners of The Villages Senior Games go on to compete in the larger Florida Senior Games.

The Village is a 55+ community, which is a special type of legal housing designation.

There are specific rules for 55+ communities which regulate the percentage of residents who must be 55 years old or older. The rules also restrict the length of time children and minors can remain inside the community, among other things.

Three areas inside The Villages, called “Family Units” allow families and are not age-restricted:

The history of The Villages traces back to the 1960s, to the tail end of a massive real estate boom in Florida.

The Villages began as a modest mobile home community. It was one of many large retirement communities in Florida, which were built to provide affordable housing for retirees in the thriving American economy post World War II.

At that time the idea of “Retiring in Florida” was possible for the American middle class for the first time in history.

Schwartz was one of many people in Florida who sold land by mail, which was a common practice at the time before the practice was made illegal.

Although it was moderately successful, the operation took off in the 1980s when H. Gary Morse joined the operation and made significant changes. In 1992 The Villages renamed itself and assumed the name it uses today.

Historians say that Morse had a talent for anticipating what retirees might like in a master-planned community, and selling them a lifestyle they wanted.

Morse, Schwartz and the rest of The Villages team massively expanded their operation. They bought more land, developed it, and sold it, in an endless process.

The Villages is still growing and expanding its footprint today, making it one of the fastest-growing cities in Florida.

Politics in The Villages

The Villages is a major political force in Florida because it’s home to more than 130,000 residents in an otherwise rural section of central Florida.

Residents in The Villages tend to be politically active, and they tend to vote.

Presidents and other government officials, especially Republicans, often visit The Villages on campaign and fundraising missions.

The Villages is generally a very conservative community. Voters tend to favor the Republican party by a wide margin.

There are liberal, Democrat and independent voters in The Villages, but they are vastly outnumbered by Republicans.

The Best Things about The Villages

Many people love living in The Villages, for a variety of reasons.

Here are other commonly mentioned “Best Things” from people who live in The Villages:

Downsides of The Villages

Although many people love livin in The Villages, there are downsides to the community and lifestyle.

Here are other commonly mentioned downsides to living in The Villages:

The Villages is a unique community with its own pros and cons. It’s a magnet for strong opinions, including positive and negative.

If organized activities, “team spirit” and “living inside a bubble” appeal to you, then it might be a great place to enjoy life.

Although there are downsides to life in the Villages, and the impact it has on Florida and surrounding communities, it offers a unique lifestyle which attracts many people.